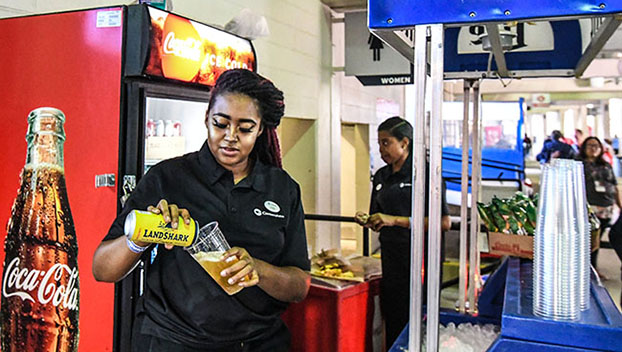 Tyra Barganier pours a beer for a customer before the start of the Mississippi vs. Texas A&M game at Vaught-Hemingway Stadium in Oxford, Miss. on Saturday, October 19, 2019. The game is the first for Mississippi to sell beer. (Bruce Newman, Oxford Eagle)

For the first time in the history of Ole Miss athletics and Vaught-Hemingway Stadium, last Saturday marked the first time fans were able to legally purchase and consume alcohol at a sporting event.

Purchase and consume they did.

With the ban on alcohol sales being lifted by the SEC earlier in the summer, Ole Miss didn’t make a decision to sell alcohol until August. They intentionally held out until the fifth home game to begin selling, citing a desire to learn from how other programs were doing so and alleviate any potential hiccups in the process. At least throughout the opening weekend of sales, no incidents were noted and the University described the overall experience as positive.

“This is another opportunity to enhance what is already one of the premier game days in college football,” interim athletics director Keith Carter said during the University’s initial announcement in August. “I want to thank (then- Interim) Chancellor Sparks and the rest of our University administration for their leadership and support during this process. We expect this decision to help reduce incidents associated with overconsumption on game days. The athletics department will work hand-in-hand with other campus officials and within the guidelines of the SEC to ensure a safe and responsible environment for all fans.”

Alcohol will also be available at remaining home football games against New Mexico State and LSU. Plans also exist to begin selling alcohol in The Pavilion at the start of basketball season.