Much of Mississippi on alert for heavy rains, flooding 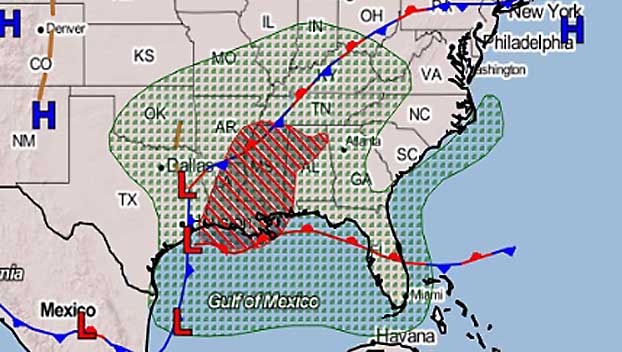 A majority of Mississippi residents will endure heavy rains and the threat of flash flooding today as a cold front moves across the state.

The National Weather Service says an advancing cold front will collide with a weather disturbance that became a tropical depression early Friday in the Gulf of Mexico.

A Flash Flood Watch continues until early Saturday afternoon for most of Mississippi, with the exception of the far northeastern counties.

Soaking rains moved into the state early Friday morning and will continue through much of Saturday.

Forecasters say coastal Louisiana could receive as much as 10 inches of rain Friday and Saturday; 6 inches was possible across a wide section of Mississippi. Residents who live in low-lying areas should remain alert for high water.

A tropical depression in the Gulf of Mexico and is expected to move across southeast Louisiana before moving up the western side of the state on Saturday.

If it strengthens to a tropical storm,  the storm will most likely be named Olga. But, forecasters don’t expect it to get that strong. It is expected to merge with the cold front late Friday, preventing any further development.

The rain is forecast to end Saturday afternoon, followed by a return to dry and seasonably pleasant weather for Sunday.