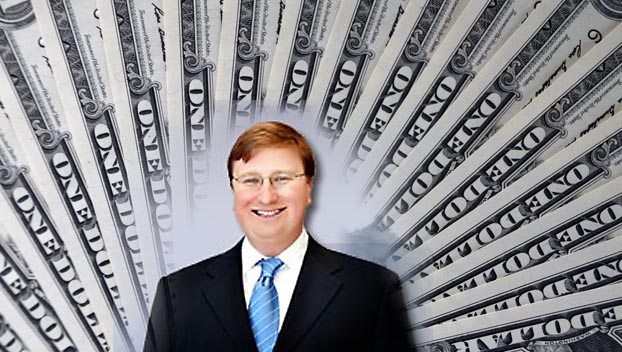 Republican Lt. Gov. Tate Reeves has spent more than twice as much as Democratic Attorney General Jim Hood in the open race for Mississippi governor.

Candidates’ deadline to file periodic campaign finance reports was Tuesday, a week before the state’s Nov. 5 election. The reports show money raised and spent through Oct. 26.

Reeves has spent more than $10.8 million this year, and he had nearly $2.2 million left in his campaign accounts.

They face two candidates who are running low-budget campaigns.

David Singletary, an independent who’s running on a platform of legalizing medical marijuana, reported raising $2,105 and spending $29,395 this year, with no cash remaining.

The winner will succeed Republican Gov. Phil Bryant, who was banned by state law from seeking a third term.

Among the donations to Reeves’ campaign this year are $35,000 from the Mississippi Manufacturers Association PAC; $30,000 from U.S. Medical Management of Troy, Michigan, a home-based health services company; $25,000 from Bully Bloc , a Mississippi State University alumni PAC led by lobbyist Camp Murphy; and $25,000 from Third Lake Capital, an investment business based in Tampa, Florida.

Donations to Hood’s campaign this year include $50,000 from the Washington-based International Brotherhood of Electrical Workers PAC; $50,000 from the National Education Association Fund for Children and Public Education; $50,000 from Clarksdale attorney Bill Luckett, who unsuccessfully sought the Democratic nomination for governor in 2011; and $35,000 from Jim Barksdale , a former Netscape CEO who now manages a family investment company based in Ridgeland.

Hood and Reeves are among the candidates scheduled to speak Thursday in Jackson at Hobnob, an informal gathering of business people hosted by the state chamber of commerce, Mississippi Economic Council.