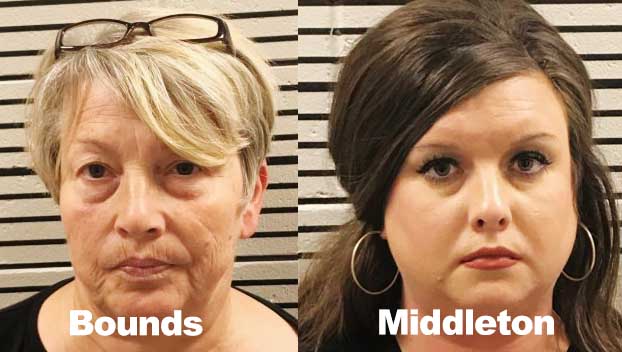 Helen Bounds, former Town Clerk of Raleigh, was presented with a demand letter worth $48,339.25 when she was arrested for embezzlement.

Justin Middleton, former solid waste clerk for the Smith County Board of Supervisors, was issued a demand letter worth $33,525.29 when she was arrested for fraud and embezzlement.

Bounds is accused of using her position to embezzle public money by issuing 30 unapproved payroll checks to herself between January 2012 and July 2018. Since she had little supervision, Bounds was able to hide the payments from both the mayor and board of aldermen. Investigators determined the Town of Raleigh lost over $23,000 after tax and retirement withholdings for the checks were calculated.

Middleton allegedly embezzled over $20,000 from the Smith County Solid Waste Department by manipulating the payment software used by the office. In addition to improperly crediting her own account, she is accused of stealing cash payments meant to pay fees for solid waste collection by entering false credits or closing and recreating accounts. Her scheme was reported when accounting inconsistencies were found.

Both women surrendered to Special Agents at the Smith County Jail. Both were released from custody after posting a $5,000 bond.

“These individuals stole a substantial amount from the people of Smith County. Unfortunately, their schemes are similar to others we have recently seen around the state,” said Auditor White. “Voters and government employees need to share the stories of these types of embezzlement and be on the lookout for similar schemes around the state. The only way we will stop all theft of public funds is by working together.”

Bounds’ time as Town Clerk of Raleigh is covered by surety bonds worth $65,000, and two $50,000 surety bonds cover Middleton’s employment as a solid waste department clerk. A surety bond is similar to insurance designed to protect taxpayers from corruption. Both women will remain liable for the full amount of each respective demand in addition to criminal proceedings.

Suspected fraud can be reported to the Auditor’s office online any time by clicking the red button at www.osa.ms.gov or via telephone during normal business hours at 1-(800)-321-1275