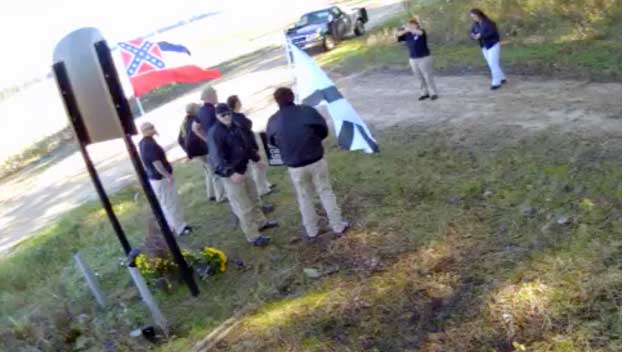 A group of white supremacists were reportedly caught filming a propaganda video Saturday at the site where a young black man was killed in the Mississippi Delta in the 1950s.

The Emmett Till Interpretive Center posted a video on social media showing a group of approximately seven people standing in front of a newly dedicated memorial to Emmett Till, a 14-year-old black teen who was killed in 1955 for reportedly whistling at a white woman.

Till’s brutal murder ultimately made him become and icon of the civil rights movement.

A memorial sign at the site where his body was found has been vandalized several times. In recent weeks a bulletproof sign was erected at the site. The armored sign was in response to multiple cases in which the old signs were shot.

The Emmitt Till Interpretive Center used the video to promote a fundraiser for the organization writing:

“A white supremacist group visited our Emmett Till historic marker, dedicated just weeks ago, today. Thank them for reminding us why this work matters by donating at http://emmett-till.org

In the video the people appear to be filming themselves in front of the sign, while holding two flags. One flag is the official flag of the state of Mississippi, which remains the only state flag to contain vestiges of the Confederacy. The other flag is a white flag with a black X on it, which is known as the League of the South flag, used by many white nationalist and white supremacist groups.