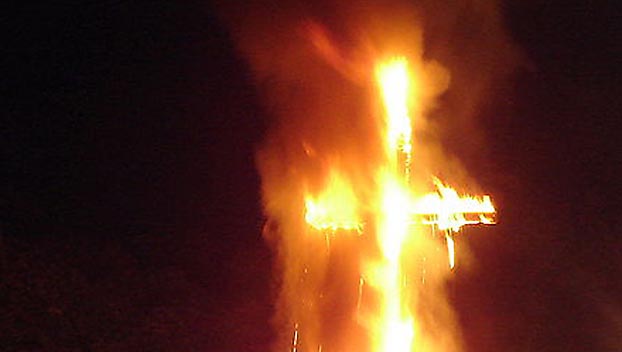 A Mississippi man was sentenced to spend three years in federal prison Tuesday for his role in a 2017 crossburning near the home of a black family.

The Honorable Judge Keith Starrett, of the United States District Court for the Southern District of Mississippi, sentenced Defendant Graham Williamson, 38, to serve 36 months incarceration on federal charges for his commission of a crossburning on Oct. 24, 2017, in Seminary, Mississippi.

Williamson previously pleaded guilty on Aug. 5, 2019, to one count of interference with housing rights, a federal civil rights violation, and one count of conspiring to use fire to commit a federal felony.

Williamson, along with a co-conspirator, built and burned a wooden cross near the home of a juvenile victim, M.H., who lived in a predominantly African-American residential area of Seminary. He burned the cross to threaten, frighten, and intimidate M.H. and other African-American residents because of their race and color, and because they lived in and occupied residences in that area of Seminary.

“The defendant invoked a terrifying symbol of racial violence to threaten and intimidate the victims for no other reason than their race and where they lived,” said Assistant Attorney General Eric Dreiband of the Civil Rights Division. “Hate crimes like this contravene our society’s well-established principles of equality and freedom from race-based intimidation, and the Department of Justice will continue to pursue and prosecute such crimes to the fullest extent of the law.”

“Those who terrorize our people and commit crimes based on the color of someone’s skin will receive swift and certain prosecution from this office,” said U.S. Attorney Mike Hurst of the Southern District of Mississippi. “Working with our law enforcement partners, we will continue to do all that we can to prevent such racist crimes so that all our people can live in peace and without fear.”

“When people violate the civil rights of others for the sole purpose of intimidation, specifically burning a cross as in this case, it terrorizes an entire community,” said FBI Jackson Division Special Agent in Charge Michelle A. Sutphin. “Mississippians shouldn’t have to fear for their safety within their own neighborhoods, and this case should send a strong message to those who threaten others based on race or color. Civil rights investigations remain a top priority for the FBI in Mississippi, and we will continue to vigorously investigate and seek prosecution for these violations.”

Defendant Williamson is the second individual to be sentenced for participation in this crossburning. Williamson’s co-conspirator, Louie Bernard Revette, previously pleaded guilty to one count of interference with housing rights and one count of using fire to commit a federal felony. On Sept. 10, 2019, the Honorable Judge Starrett sentenced Revette to 11 years incarceration on those two charges.

This case was investigated by the FBI’s Jackson, Mississippi Field Office, including the FBI Safe Streets Task Force and the Jackson Public Corruption Task Force. Special Litigation Counsel Julia Gegenheimer of the Department of Justice Civil Rights Division and Assistant U.S. Attorney Candace Mayberry of the Southern District of Mississippi prosecuted the case.