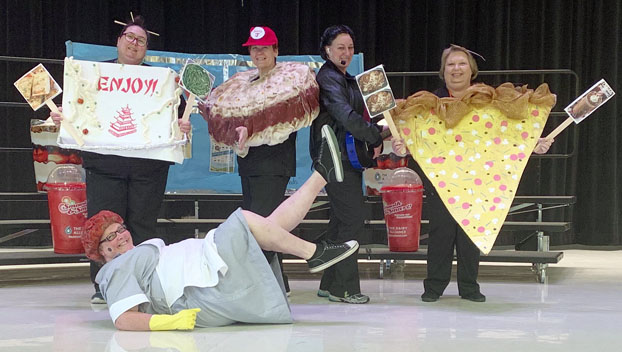 In the Story Board category, Elementary School Cafeteria Manager Myra Smith won for her story board about team collaboration.

Smith said her goal was to show how all employees in the District’s food service department work as one team. She did that by gathering images of cafeteria staff from the present going back to the 1970s.

She asked members of her staff to help compile those images, which included some photos of the students helping in the cafeteria during Farmer’s Week.

Then, she put the images together in a presentation that resembled a window, to portray the viewer looking through the window of time, Smith said.

Tina Farrell, the manager of the cafeteria at the Carriere campus, won first place for her cupcakes. Farrell said this year she entered triple chocolate cupcakes filled with Chantilly champagne flavored filling and butter cream icing with a champagne extract.

All of that was topped with an image of the skeleton key logo from MSNA created with gold edible paint.

As an extra layer of creativity, she served the cupcakes in champagne glasses. Farrell said she chose that recipe because this year’s conference was a celebration of 50 years of the organization.

The conference is a chance for food service personnel in Mississippi school districts to hear from key speakers, learn about updated regulations and hear from other food service professionals, Amaker said.