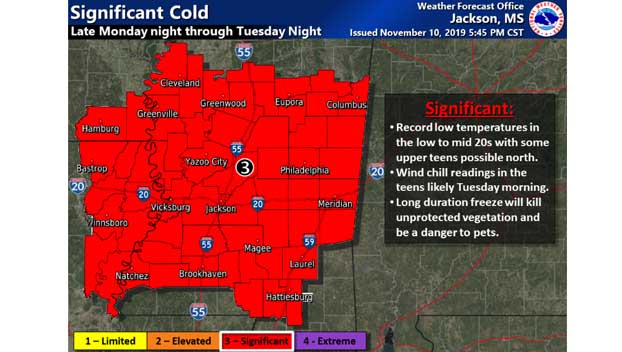 An arctic blast of cold weather headed toward Mississippi is expected to cause record-low temperatures in many areas of the state along with the season’s first hard freeze across nearly the entire state.

In north Mississippi rain will briefly change to sleet and snow Monday night, but little to no sleet or snow accumulation is expected.

Temperatures are expected to be in the low 20s in north Mississippi and upper 20s to the south.

Dangerous, record breaking cold temperatures are expected Monday night through Wednesday morning across Mississippi with wind chill values dropping into the single digits Monday night and early Tuesday to areas in the north.

To the south the temperatures will remain bitterly cold, but warmer the further south you are in the state.

“Not only are we are concerned with the threat to the growing season, but there is even some concern that this cold event could pose a threat to life and property in northern portions of the ArkLaMiss,” forecasters with the National Weather Service’s Jackson office wrote in their forecast discussion. “The combination of wind and cold Tuesday morning could send wind chill readings well into the teens, while high temperatures struggle to rise through the 30s in the afternoon.”