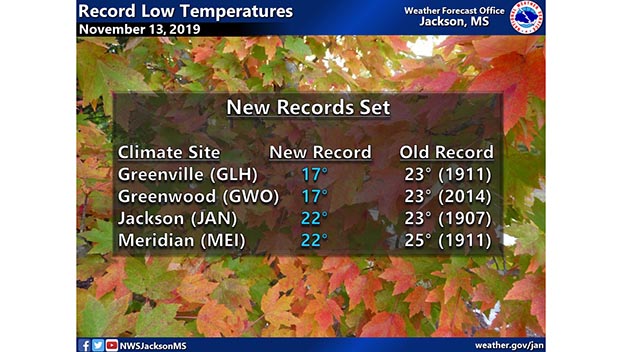 Looking for a little warmth this morning? You might try Anchorage, Juneau or even Nome, Alaska.

Mississippi residents woke up to temperatures several degrees lower than many temperatures throughout Alaska.

While residents in Greenwood were shivering at 17 degrees, Anchorage commuters were waking up to a balmy low of 31 degrees. Other low temperatures in Alaska this morning include 44 degrees in Juneau and 23 degrees in Nome.

National Weather Service weather stations in Tupelo, Greenwood, Greenville, Tupelo and Jackson set record lows — some of them previously recorded in 1907 and 1911.

As the morning progresses, the National Weather Service in Jackson expects that things will begin to warm up. Although still below normal, highs today will be in the upper 40s to lower 50s.

Once the sun is up, things will begin to warm up nicely. Although still below normal, highs today will be warmer than yesterday and in the upper 40s to lower 50s. pic.twitter.com/Fu93DZzOx3

Mississippi woman ‘shocked’ by invitation to help decorate the…