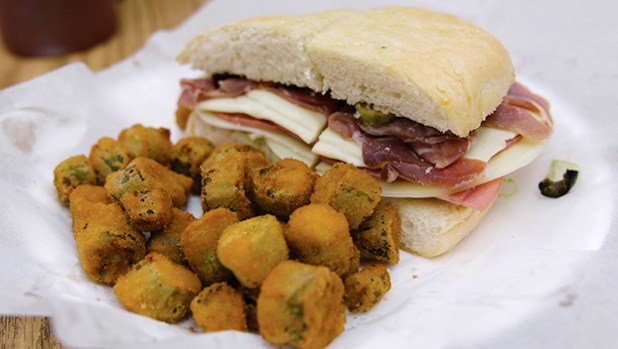 Fratesi’s muffaletta is a popular item on their menu. 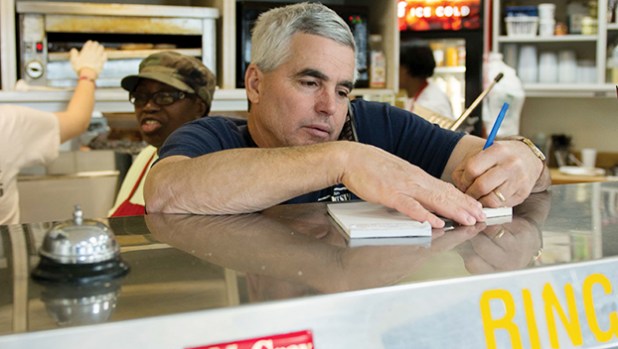 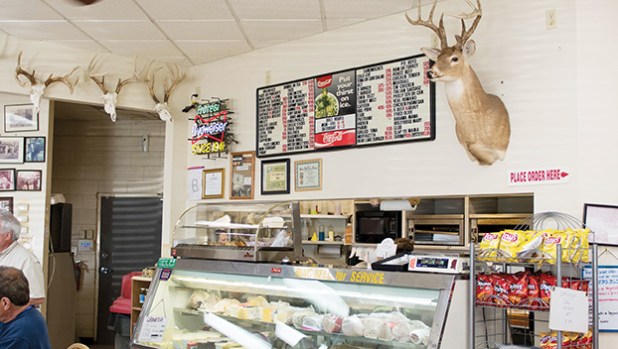 Fratesi Brothers offers a full-service breakfast and lunch for its customers. 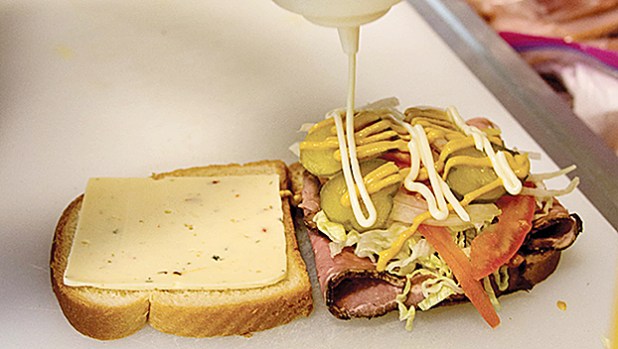 Miss Emma adds mayonnaise to one of the grocery’s famous sandwiches.

The moment the doors open at Fratesi Grocery and Service Station, it is undeniable that you’ve walked into something of an establishment.

There are sounds of regulars discussing Mississippi politics and this year’s crops, cooks joking with each other while they prepare potato salad for the lunch crowd, children riding beverage carts around on the tiled floors.

The Leland gas station smells like your grandmother’s kitchen—the air is full of buttery biscuits and crackling catfish. The walls are filled with Fratesi family photos and plaques of customers with fish they’ve caught. Skull mounts line the top of the walls in between the cash register and deli.

It feels familiar. Even for a first-timer.

Tony Fratesi, the son of Italian immigrants who found themselves planted in the Mississippi Delta, opened the original store in 1941. Since then, Tony’s three sons have taken over the fuel station and grocery as a means to get by and preserve the family business.

The original store has since closed.

“There’s a picture of the old store right up there,” part owner Mark Fratesi says as he points to a collection of old photos of his parents and the original grocery arranged on the wall behind the cash register. The current store stands off of Highway 82, easy to glaze over on the two-lane highway dotted with gas stations and convenient stores every few miles.

Mark is a stoic man with hands that tell a story in and of themselves. They are strong and calloused—a testament to the work he puts in behind the counter at Fratesi’s and on the family’s farm he also shares with his two brothers—he fidgets with a menu on the table while he talks.

“Let them leave and I’ll tell you,” Mark jokes, winking at his brother Louis. “Nah, we get along pretty good.”

Mark and Louis and Kenny Fratesi are not the first generation of Fratesi brothers to wear the multiple hats of simultaneous grocery-owners and farmers.

Tony Fratesi opened the grocery in partnership with his brother Larry.

Local farmers break up their day with stretches at Fratesi’s. They start their morning with biscuits and coffee, take a mid-day pause from the fields for one of Miss Emma’s po’boys at lunchtime and end the day with a cold beer at 5. It’s the gathering place and local watering hole for anybody and everybody. It greets farmers, preachers, travelers, family members.

“You know in this area farming required a lot more labor back in those days,” Mark Fratesi explained. “Everybody lived out on the farm and they would come into our old store and buy groceries on payday to get them through that next week. But that’s changed. Everybody has vehicles these days and moved out of the countryside.”

The Fratesi brothers realized that they needed to change their strategy to stay relevant, which resulted in a new space to accommodate their deli-driven store. “We can’t compete with the big convenience chains on fuel prices and so that’s how we got where we are,” Mark said.

The deli has 5 cooks and opens at 6 a.m. sharp for breakfast Monday through Saturday with closing time around 7 weeknights.

Miss Emma has been cooking at Fratesi’s for sixteen years. She is famous for her cheeky smile and sarcastic mouth, along with a recognizable coleslaw recipe. Emma learned to cook out of necessity, but it has become an act of love for her. She was one of 12 kids and learned to cook as a way to help her mom balance the load—and now she does the same for her regular customers, making sure they get what they want how they want it.

“They’re all kind and friendly and goodhearted. They all know me,” Emma says while she stirs baked beans. “I know just about what all of them have in the morning time. They say ‘you got me?’ and I say ‘I got you.’ It’s that kind of place.”

While the building looks different than it used to, the grocery’s customers do not. The current customers are the sons of first generation Fratesi regulars and now their children are adding Fratesi’s to their daily routine too.

“We hear the same old story you know,” joked Mark. “We’ve got some really loyal customers whose parents came and now their kids are coming. You know all of them are probably friends before they’re customers.”

For those unfamiliar with the Deep South, indulging in gas station fare is tagged as a “last-resort” kind of meal, but in the Mississippi Delta it has become a staple for many.

Fratesi’s is more than what meets the eye. From first glance it looks like every other Chevron or Shell—with rows of nabs and beef jerky and racks of tobacco products behind the counter. After a closer look it becomes much more than that.

Fratesi’s serves homemade food worthy of a stand-alone restaurant. Philly Steak Po-boys, homemade sausage, duck gumbo and Josephine Fratesi’s spaghetti fill the plates of the restaurant’s patrons. The food is not the overly greasy or second-grade food that is normally associated with gas station cuisine. It serves po’boy bread worthy of New Orleans’ approval and hints of the Fratesi’s Italian beginnings. It’s made from family recipes and capable hands.

The grocery operates on the honor system and in-house charge accounts that have been around since the original store’s doors first opened.

“I had a steak-and-egg sandwich and a coffee, old man,” a regular breakfast customer jokingly tells the Fratesi brother manning the register.

Diners relay their orders on their way out the door—charging it to their regular accounts or paying Louis or Kenny or Mark behind the counter.

“Not many places you can do that anymore I don’t guess,” Mark says while nodding at a customer walking through the door.

The honor system carries on to 5 o’clock where imbibers tally the number of beers they’ve had on a ledger before walking out the door.

Happy hour is magic hour at Fratesi’s. Pickup trucks line up around the corner and the grocery transforms into a social club.

“We’ve kind of tamed down since my dad ran the place,” Mark said with a grin. “He’d stay here as long as they want to, sometimes until nine. I run ‘em out of here by seven every night.”

Mark joked that most of the happy hour regulars normally stay and chew the fat together for three or four beers and end up taking a few more home for a six-pack price.

“We’re right outside city limits so we can do that.”

Mark Looney, a soybean farmer, is a regular to the grocery for breakfast and lunch—and the occasional happy hour.

“When you live on one side of town and farm on the other this is the in between,” Looney laughed as he straightened his Carhartt jacket.

He told the story of one night when there were six or seven people behind the counter during happy hour and a girl from out of town walked in—which Looney explained he knew because nobody recognized her—“we know everybody, you know?”

She asked if any of them worked there and one man, who definitely didn’t, said “everyday” and they all fell out laughing.

John Mark Looney, Mark’s oldest son, joined us for coffee midway through our conversation. He fiddled with his Styrofoam coffee cup while he told us about his family and we made the world smaller, in true Mississippi fashion, as we realized mutual friends we share.

He told us of his recent travels to Mexico City which evolved into thoughts about the power of perception and what that means for Mississippi.

“You know Mexico gets a bad rep, but it’s just like if you go to New York and tell people you’re from Mississippi.”

And how true that is—people who have never been to Mississippi automatically impose negative labels onto the state as a whole, without taking a chance to see the good that also comes with it. That’s something that all people do—we tend to only believe the bad things we have heard without giving a person or place or idea a chance to prove itself.

But Fratesi’s does just that, it brings some light into the dark corners that Mississippi is known for. And that is a true Mississippi story—healing that comes in the form of a tucked away convenience store over comfort food and a cold beer.

The Baptist preacher in town invited me to sit with him while I ate my Muffuletta and he ate his shrimp po’boy. In between bites he leaned over and confirmed what Fratesi’s is doing.

“This right here is it. It’s not this perception of Mississippi you hear. From very wealthy to very poor from white to black this place is for everybody, anybody who walks in the door. Look around and you’ll see.”

And once I looked I did see. There were people of all walks and talks shaking hands and laughing and sharing meals together.

“I always say we ought to leave, but I imagine we’d just come back. Everybody always says the grass is greener somewhere else, but it’s hard leave home, you know?”