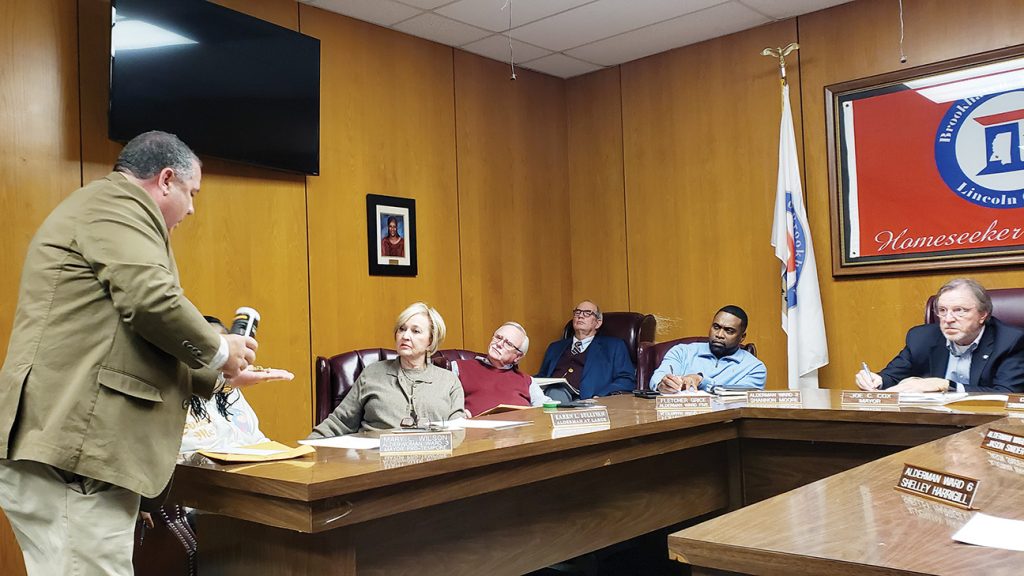 The sheriff-elect of Lowndes County drove nearly four hours to Brookhaven to urge the mayor and Board of Aldermen to ban products containing kratom, which is sold in stores as an energy supplement.

Eddie Hawkins, a lieutenant with the Mississippi Bureau of Narcotics with 25 years of drug enforcement experience, is afraid of what can happen if the drug is left unchecked.

A member of the Lowndes County Community Foundation’s Crime and Addiction Task Force, he’s been traveling the state for the past year to educate the public on a “very, very dangerous substance” that’s being sold in convenience stores and gas stations in Mississippi.

Joined by Taskforce Chairman Glenn Lautzenhiser and Dr. Charles Rhea, a Columbus orthopedic surgeon, Hawkins asked the city Tuesday to consider passing a ban on kratom —which 12 counties and 27 cities have already done, he said.

“This is destroying lives. It’s destroying families. It’s highly addictive and it’s actually killing people in our state,” he said. “Thirteen people last year from a kratom overdose. It’s the best kept drug secret that we have today.”

According to the Centers for Disease Control and Prevention, as of April, kratom was not scheduled as a controlled substance. However, since 2012, the Food and Drug Administration has taken a number of actions related to kratom, and in November 2017 issued a public health advisory. In addition, the Drug Enforcement Administration has identified kratom as a drug of concern, according to a CDC report.

Hawkins said kratom, also known as biak-biak, comes from the leafy plant mitragyna speciosa, found on a tree indigenous to Thailand, Malaysia, Myanmar and other areas of Southeast Asia. Kratom is abused for its ability to produce opioid-like effects and is often marketed as a legal alternative to controlled substances, he said.

Mitragynine is an opioid-receptor found in the leaves.

Hawkins said that milligram to milligram, mitragynine is 13 times more powerful than morphine.

“That being said, your children have access to a drug more powerful than morphine,” he said. “It’s a problem that we’re seeing across the state.”

The drug is sold in several forms — capsules, energy shots and powders — under brand names like K-Shot, Kratom, Super K and Vivazen. The product has no age restriction for purchase.

“Anybody, including children, can walk into a gas station or convenience store and buy this stuff across the counter,” he said. “People are buying this stuff. We have reports of people spending $800 a week of their family income supporting their habit and drinking these energy shots that have the kratom in them.”

Individuals who use the product can become addicted to it quickly, he said, adding that one dose will stimulate and eliminate pain, while more can cause an overdose.

“The body builds up a tolerance so the longer the user uses this drug, the more he’s got to have to get that same desired effect and that’s where the addiction comes in,” he said.

Alderwoman-at-Large Karen Sullivan invited the members of the task force to make their presentation after attending a municipality conference. Sullivan emailed board members prior to Tuesday’s presentation.

“In 2010, citizens came before the board to ask us to ban a synthetic marijuana commonly known as ‘spice.’ We adopted Ordinance 209-2010, which specifically lists plant extracts and synthetic chemicals. Since then, the state Legislature has banned spice, so that law supersedes ours. A law to ban mitragyna speciosa died in committee during last year’s legislative session,” she said. “In my opinion, it would be a good and proactive thing to add Kratom to our 2010 synthetic products ordinance in the event the Legislature kills it again.”

If Brookhaven bans the purchase, possession and distribution of the substance, the ordinance would be enforced by the police department. As a misdemeanor, it would carry a maximum of $1,000 fine and up to one year in jail.

Sullivan visited several stores in the city to check for products containing kratom.

“I went looking for kratom in the convenience stores around town, and by George, it’s in there,” she said. “I asked one of the clerks in one of the stores, ‘Do you know that this is killing people? And she said, ‘Yea, and they’re buying it right and left.’”

The board is taking the issue under advisement.