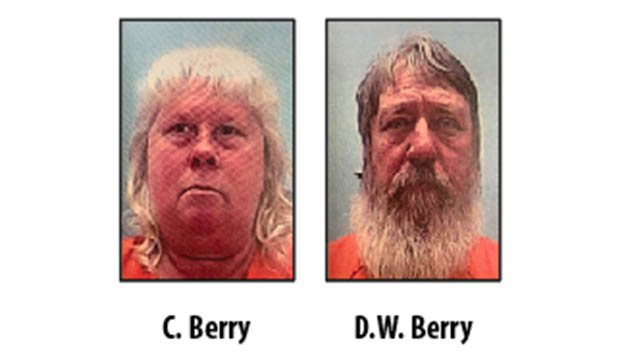 An Adams County couple face charges of simple animal cruelty after a horse they owned had to be put down by a veterinarian recently due to malnourishment, Adams County Sheriff’s Office deputies said.

Carol Jean Berry, 55, and Donald Wayne Berry, 60, husband and wife, were each charged with two counts of simple animal cruelty Saturday after the 4-year-old horse had to be put down and a mare in their possession was also determined to be malnourished.

Karren Ewing, ACSO animal crime investigator, said she had received complaints from neighbors about the condition of horses on the Berrys’ property on Robins Lake Road in Adams County.

“Neighbors had passed by and saw the 4-year-old horse on the ground up by the fence on the side of the road,” Ewing said of an Oct. 26 report.

Ewing said she went to the property that day and the passersby had put straps around the emaciated horse and gotten a backhoe to lift the horse on to its feet.

Ewing said she got a veterinarian to come to the scene.

“The vet came within the hour,” Ewing said. “We were out there about four hours. Once the horse was standing without the backhoe, the vet did some testing and gave it medication to ease the pain.”

Then, Ewing said, they discovered another horse on the property, a mare and the mother of the 4-year-old horse, that was also malnourished.

“We got the 4 year old in the shed and told them to sit up with it over night because if it fell down it would go back into colic,” Ewing said. “The next morning, the vet called and the horse was down again. He was fighting kicking and struggling to survive, but it had to be put down that morning.”

The vet fed the mare and Ewing said she told the couple if they did not give up the mare, that the sheriff’s office would take it.

Ewing said the couple’s property had very little grass and the couple admitted that they had not fed the horses.

“They admitted to three deputies and the vet that they don’t feed them but put them where there is grass,” Ewing said. “You can’t do that. You’ve got to feed them and give them hay to wash it through. They never really took responsibility for the horses.”

Ewing said the couple relinquished the mare and Hoof Beats & Paw Prints, a horse and pet rescue and transport operation in Adams County, took in the mare and are nursing it back to health before trying to adopt it out.

Both the Berrys were arrested and charged Saturday with two counts each of simple animal cruelty, Ewing said. The couple has since posted $1,000 bond each and are awaiting a court date.