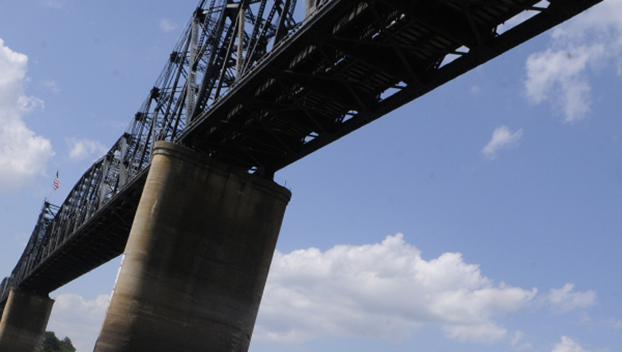 The solar powered river gauge is mounted to the bottom of U.S. 80 bridge over the Mississippi River Wednesday. The river gauge uses radar to accurately gauge the water level. ( Eli Baylis / Vicksburg Post )

Problems with essential items on the Old U.S. 80 bridge has forced the Warren County Bridge Commission to declare an emergency to make repairs.

The 1.6-mile, 88-year-old span is owned by Warren County and managed by the five-member Vicksburg Bridge Commission. It was closed to vehicles in 1998 over safety concerns presented mainly by the Louisiana Department of Transportation and Development. Louisiana maintains the Interstate 20 bridge and stopped allocating money to the bridge on the west side of the state line after it was closed to vehicles.

The bridge’s deck, is a popular site for special events like the Over The River Run, which began in 1989, 5K walks, the Bricks and Spokes ride to promote downtown, a breast cancer benefit featuring bras strung along the old road’s railing.

Kansas City Southern Railroad leases the track on the bridge from the county.

Bridge superintendent Herman Smith said bearings on two sections of the bridge and the span’s main expansion joint need to be repaired.

He said the $932,000 project will be done by OCCI of Missouri, adding construction begins Dec. 9.

“They’re roller bearings, and when it’s real cold, and the bridge contracts, they are maxed out in that position and it could damage the bearings if it is done too much, too often,” Smith said, adding the problem was declared an emergency after the bridge’s inspection in March.

The bearings, he said, are supporting big portions of the bridge.

“They look like big rollers inside of it at the bottom of it, so when the bridge contracts and expands, those rollers go back and forth,” he said. “They’re big roller bearings; under the railroad side, they’re 9 inches tall. Under the highway side, they’re 7 inches tall.”

“It’s almost touching at the top and almost at the bottom,” Smith said. “That’s for the deck, the rail and the highway, both lower and upper.”

Smith said the expansion joint was repaired in 2006. The bearings at pier 2 were redone in 2009, and the pier 5 bearings have also been redone before.

He said pier 5 has bearings under the railroad and the highway, but only the highway side needs work.

“The pier is twisting, that’s why (the work) is only needed on one side,” Smith said. The cause of the twisting, he said, is a fault under the river that is affecting the bridge and the Interstate 20 bridge. The fault, Smith said, is on the riverbank, “but it affects everything that goes out toward the center of the river.”

Although the emergency declaration was made following March’s inspection, the work was just recently approved after a lengthy process to get plans approved.