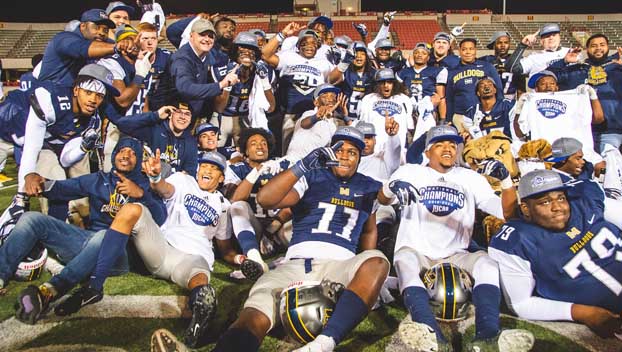 Jack Wright became the second coach in NJCAA history to win a national championship at two different schools. He won with Northwest Mississippi in 2015.

The Bulldogs broke the Falcons’ 22-game win streak and now have the longest active streak in the country at 16.

The Regulators, the Bulldogs’ defense, held Lackawanna to 152 total yards and gave up only seven points. The Falcons’ 18th-ranked rushing offense was held to 38 yards — 140 below their average. Gulf Coast forced eight three-and-outs, and Lackawanna didn’t have a drive longer than 33 yards until its final possession.

The Falcons (10-1), who came into the game with the second-ranked scoring offense at 45.5 points per game, generated all their points in a four-play flurry late in the first half.

Lackawanna sacked Chance Lovertich (So., Jackson Prep/Brandon) and forced a fumble with 3:17 to play in the half. The Falcons scored on the next play, an 8-yard pass. Two plays from scrimmage later, they forced another fumble on a sack and returned it 14 yards for a 13-10 lead.

It was Lackawanna’s ninth defensive touchdown of the year, which leads the country.

The teams didn’t manage any points in the third quarter, but Gulf Coast took full advantage of critical Lackawanna roughing-the-passer penalty to convert a third-and-22 on the first play of the fourth quarter. The Falcons, who were the most-penalized team in the NJCAA coming into the game at 128.4 yards per game, committed a facemask penalty later in the drive.

Bolton converted a fourth-and-1 from Lackawanna 22, and Jymetre Hester (Fr., Glades Central/Belle Glade Fla.) turned third-and-4 into another first down with a 10-yard reception to the 5.

The Bulldogs forced a three-and-out, and Deondre House (Fr., Senatobia/Senatobia) made a House Call on the next play with a 47-yard dash for the final points.

The Regulators’ secondary put the finishing touches on the win with a T.J. Ficklin (So., Brandon/Pelahatchie) pick on the next play and Jackie Matthews (So., Pinson Valley/Pinson Ala.) ended the Falcons’ last drive with an interception in the end zone with 10 seconds left.

Ficklin led all players with four passes broken up. The linebacking duo of Mike Smith (Fr., Ridgeland/Flora) and Navonteque Strong (Fr., Scott Central/Forest) led the Bulldogs with eight tackles each. Strong had three tackles for loss and a sack, while Smith had 2.5 tackles for loss and 1.5 sacks.

Malik Jones (Fr., Grenada/Grenada) and Jamie Sheriff (So., Terry/Terry) recovered fumbles for Gulf Coast, which forced four turnovers and survived three of its own.

Gulf Coast jumped out to a 10-0 lead. After Marquise Bridges (So., Petal/Brookhaven) ran through a slew of Lackawanna tackles for a 32-yard reception to the 1, Austin Bolton (So., Poplarville/Poplarville) plunged in for the first of his two touchdowns.

Caden Davis (Fr., Pearl/Pearl) added a 28-yard field goal with 4:35 left in the first half before the game quickly turned on its head following the disastrous final four minutes.

House led Gulf Coast rushers with 78 yards on nine carries, while Bolton ran 23 times for 74 yards and the two scores. Bridges had four catches for 62 yards.