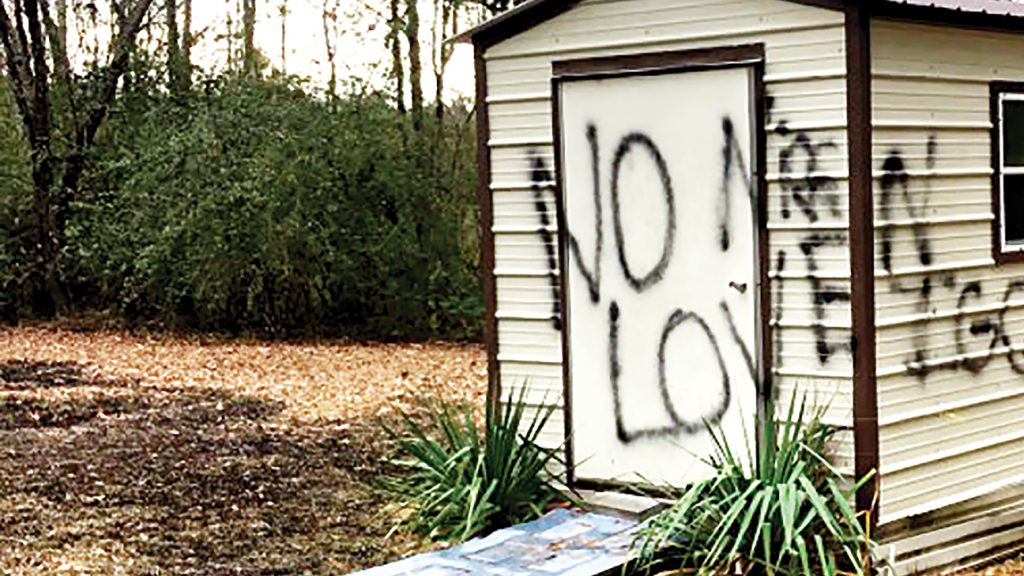 Photo submitted A shed behind a house destroyed by fire on Hooker Road a spray painted with a racial epithet.

A house fire in Lawrence County is being investigated as a possible hate crime.

Sheriff Lessie Butler said his office was notified about 9 a.m. Friday that a home in the 400 block of Hooker Road had been completely destroyed by a fire sometime in the night.

It appears the brick home was vacant in Silver Creek and the homeowner, who is staying in Louisiana, was contacted Friday, Butler said.

Deputies arriving at the scene found the fire out, the home gone and a disturbing racially charged message spray painted on an aluminum shed still standing on the back of the lot and untouched by the fire.

“On the little shed in the back, it’s got some negative stuff wrote on it,” Butler said.

The person who wrote it included the N-word in the racial epithet. Butler said the homeowner is black.

The sheriff is contacting the FBI, though he isn’t convinced it was aimed at anyone in particular. Still, he wants to get federal investigators involved in case he’s wrong.

“It’s right at a black neighborhood where it’s at. It don’t seem like there’s racial tension. My gut feeling’s telling me that it’s not what’s wrote up, but I guess that’s not for me to judge,” he said.

The cause of the fire won’t be known until the state fire marshal investigates Monday. Butler doesn’t know if the fire was deliberately set and if the message and the fire are connected.

The homeowner is expected to return today.

“If this wasn’t already wrote on his building, then we’ll know that somebody did this when they did what they did,” Butler said.

This is not the first possible hate crime that has occurred during Butler’s tenure as sheriff.

In March 2018, motorists driving on Hwy. 27 from Copiah County discovered a burning cross at the county line. When the deputies responded, they found a cross tied to a sign and it was still smoking, though the fire was out.

The cross was about two feet tall and was made out of materials that would burn. It was attached to the left post underneath the green highway sign, but didn’t touch the ground. A can, which he suspects contained freon, was attached to it.

Around the same date two years earlier, deputies responded to a similar call in Sontag.

The FBI was called both times, but no suspect was ever named.

Butler asks that anyone with information about the fire or the racial epithet, call Lawrence County Sheriff’s Office at 601-587-2961 or Metro Crime Stoppers at 601-582-STOP (7867). Tipsters can also go online at www.p3tips.com and select Monticello as the location.

Tips are confidential and no calls are taped, traced or recorded, Butler said. All callers are given an identification number to claim cash reward money. Reward money amounts are decided upon by and subject to the discretion of the Metro Crime Stoppers board of directors.