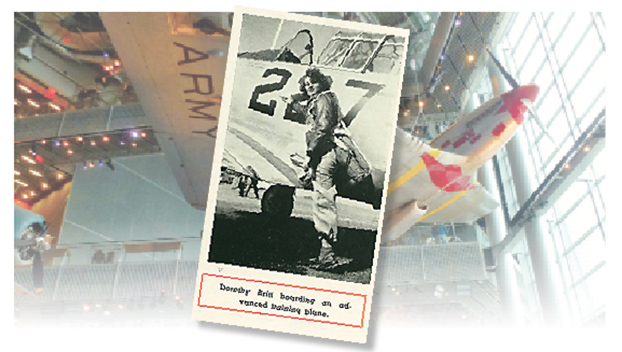 When Connie Parker donated her mother’s belongings to the World War II Museum in New Orleans last week, she offered more than a part of American history. She left behind a piece of herself.

During Thanksgiving week the Natchez resident and wife of Natchez native Jack Parker shared a special part of her family with the museum dedicated to telling the story of the United States and its contributions to an Allied victory in World War II.

Thanks to Parker’s donation, her mother’s role in the war effort is now part of that story.

Parker’s mother, Dorothy Britt Mann of West Texas who died in 1998, was one of 1,100 women who were Women Airforce Service Pilots (WASPs) and voluntarily trained as air force pilots during WWII.

Because their numbers were so few, the WASPs were not recognized as an official auxiliary branch of the military and artifacts from women fliers were rare, museum officials said.

The WASPs played a vital role to help the men in service by testing refurbished and new planes hot of the assembly line for safety and stability before they were put into action and ferried planes to airbases across the nation.

Parker said she didn’t realize how difficult it would be to leave Mann’s things to the museum until she did.

The museum honored Mann’s family with a special presentation on Nov. 26 for their gifts, which included Mann’s dress uniform — a jacket and slacks, her flight jacket with the WASP logo designed by Walt Disney in 1994, her wings pin and other insignias that were attached to her uniform, her flight suit — which she and the other women of the force called a “zoot” suit and other written materials from the U.S. Department of the Army from before and after Mann enlisted with the WASPs.

“I didn’t realize it would be as difficult as it was after the fact,” Parker said. “I had to leave the museum and leave a part of me there.”

However, Parker said her sons, Shannon and Crosby Parker who have both served the U.S. military, convinced her that donating the items was the best thing to do and she had no regrets.

“They said it needed to go somewhere where other people could enjoy it,” Connie Parker said.

The family’s contribution allowed room for a full-fledged exhibit that details a part of her mother’s life, when Mann dropped out of college as soon as the program opened and bought her first plane — a Piper Cub — to earn flight hours and pursue her pilot’s license.

Parker said Mann applied for WASP the day after her 21st birthday, anxious to join the service. Mann was accepted as a WASP trainee in November 1943, graduated and was later assigned to Moore Field and then Love Field in Texas.

“These women fulfilled a role by flying these planes and even carried targets behind them for shooting practice,” Parker said. “… These women flew all over the U.S. to deliver the planes and they would have to take commercial airlines back to the base. I thought it was funny to picture mom and walking on a commercial flight wearing her uniform and carrying a parachute and making other passengers wonder why.”

Parker said the WWII museum spoke eloquently of her family during the presentation and did a wonderful job of turning their gift into a special memory.

“They said that if it weren’t for this donation they wouldn’t have anything to show and tell the WASP’s story,” Parker said. “… A lot of the men at the time didn’t believe that women would be able to fly … but they flew everything and did a great job doing it.”