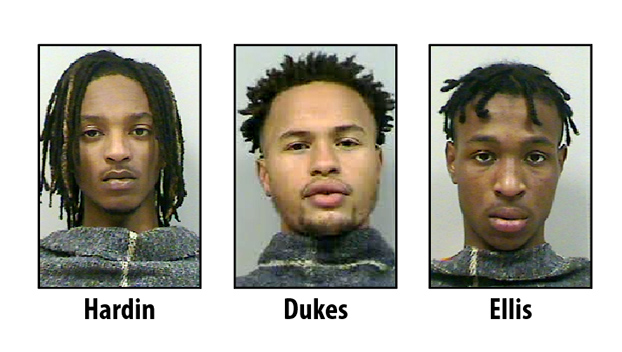 Natchez Police say they have solved a series of daytime burglaries and arrested three men allegedly responsible for the crimes.

Keimon Ellis, Kijuan Dukes and Dalarrian Hardin, all 19 and all of Natchez, have been arrested. They face charges ranging from possession of stolen property, burglary and weapons charges. Officers said those charges are evolving as the investigation continues.

“In the month of November and early part of December, the Natchez Police Department received numerous calls for burglaries within the southern part of the city limits,” according to a press release issued Friday morning by Police Chief Walter Armstrong. “The burglaries happened during the daylight hours while residents were mostly likely to be at work or away from home.”

“A resident made a mental note when he noticed a person, vehicle or activity that was not normal for the neighborhood. The resident relayed that information to the police when he learned of the residential burglaries,” the press release reported. “This information, along with serial numbers of the stolen property, helped to break open the investigation of the burglaries.”

Police have been able to recover some high-powered rifles and game consoles.

The investigation is ongoing and as the case develops, Armstrong and his officers expect to make additional arrests.

“The Natchez Police Department wants to remind people that during the Christmas season to be mindful of their surroundings and the activities in their neighborhoods. If you see something suspicious call the police. If a vehicle or a person doesn’t belong make a note of it; watch out for your neighbors.

“If you are expecting a package to be delivered to your residence, make arraignments to be there or someone you trust when the package is delivered or have it delivered to your place of employment if you can. Have a neighbor retrieve the package for you until you get home. The porch thieves are active during the Christmas season. The Natchez Police Department will have patrols circulating through the neighborhoods looking for suspicious activity,” Armstrong said in the press release.