Mississippi tornado survivor: ‘Like a bomb went off … All hell broke loose’ 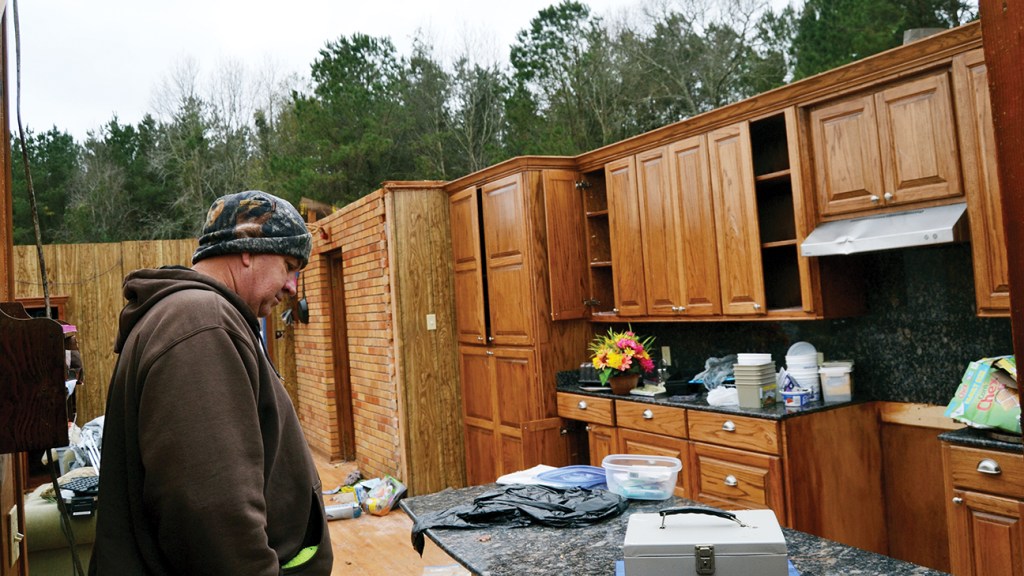 Leon Wallace inspects his mother’s kitchen Tuesday after a tornado ripped the roof off of her Concord Lane home. (Photo by Donna Campbell/Daily Leader)

Faye Wallace rushed into the bathroom of the brick house she’s called home for 57 years, hoping to outrun the tornado ripping through Bogue Chitto Monday afternoon.

The 86-year-old woman who hates storms sought refuge in the safest spot she could think of. Her son, Bruce, stood in the doorway near her.

Then the roof disappeared.

Further down Concord Lane, Red Sides was sitting in his recliner watching television with his wife, Connie, when the weather alert rang out on his cell phone. He ignored it.

“Next thing I know, it’s like a bomb went off. All hell broke loose,” he said.

The small one-bedroom house next to his daughter’s mobile home seemed to explode around him, he said.

Crews from the National Weather Service started surveys Tuesday in the far southwestern corner of Lincoln County near the border of Franklin and Amite counties where EF-2 damage was found. The storm appears to have been on the ground from a few miles west of Gloster into Lincoln County.

Survey crews are back on the ground today and expect to be finished this week.

Trees and power lines were down on Hwy. 98, Hwy. 569, Concord Lane and Bogue Chitto Road.

Galey said a driver was rescued Tuesday after he tried to drive through a flooded section of Hog Chain Road near the railroad tracks. He warned motorists to avoid flooded roads.

Bruce Wallace spent Tuesday helping his sister, Patricia Moak, gather what was salvageable from the home he shared with their mother. He was still a bit in shock from the disaster from the day before and watching the roof fly away.

“It happened so quickly,” he said.

Moak said it’s a miracle her mother made it out of the storm with just a scratch.

The woman’s bedroom is drenched and demolished. But a few items were left untouched.

“She had a praying hands and a cross and still hanging in there,” Moak said.

Red Sides recalled the tornado — which hit his house just a few minutes after the Wallaces’ smashed roof and insulation blew into the woods — happened quickly.

“They say it sounds like a train and they’re not lying,” he said. “By the time you realize the train’s coming, it’s too late. We just went rolling. We wound up on top of it when everything got stopped. When we came to, we were on top of the tin. It was pouring down rain and I’m looking at the sky.”

Everything the Sideses owned was scattered in the wreckage around them. What was left of their Christmas tree was under his recliner and the presents that had been wrapped under it “are probably somewhere on Bogue Chitto Road,” he said.

Originally from Arkansas, the 60-year-old Army veteran moved to Lincoln County a few years ago to be close to their grandchildren. Connie Sides may have broken her hand and he suffered some scratches. He said they’re blessed to be alive.

“The good Lord wasn’t ready yet,” he said.