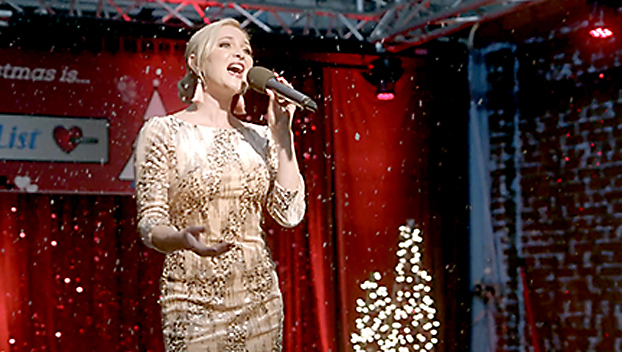 Vicksburg native Katherine Bailess performs a scene in the upcoming Lifetime movie “A Date By Christmas Eve.” The movie first aired Sunday and will air again at 7 p.m. Christmas Eve (Tuesday) on the Lifetime channel.

Vicksburg, Mississippi, native Katherine Bailess can check one thing off her list.

Growing up in a family that loves Christmas, the actress said she has secretly wanted to do a Christmas movie, and on Sunday, she got her wish. Bailess appeared in “A Date By Christmas Eve” on Lifetime.

If you missed it, it will air again at 7 p.m. central on Christmas Eve or is available for streaming on the Lifetime site.

The movie, Bailess said, is about an overly-giving woman who discovers the latest dating app for her firm has given her the magical powers to teach naughty people a lesson.

“But when Chelsea lets the app get the best of her just before Christmas and selfishly puts the guy she likes on the naughty list by mistake, she has to find a way to right her own naughty deeds and get him to forgive and fall for her once again,” Bailess said.

“I love her. She can be way too needy at times, but she is the most loyal spontaneous friend you will ever meet,” Bailess said.

When asked if she had a favorite scene in the movie, Bailess said, it was difficult to pick one.

“But one that sticks out the most is when my character gets to sing an original song in front of an audience,” she said.

Filmed in Los Angeles, Bailess said she loved working with the cast and crew of the movie.

“It had also been fun to film a Christmas movie in the summer,” she said. “Walking around in Christmas pajamas and sweaters in the middle of June is one for the books.”

This is not the first time Bailess has been featured in a Lifetime movie. In 2018, she played the lead in the thriller “Deadly Matrimony.”

“A Date By Christmas Eve” will air at 7 p.m. Tuesday on the Lifetime channel.