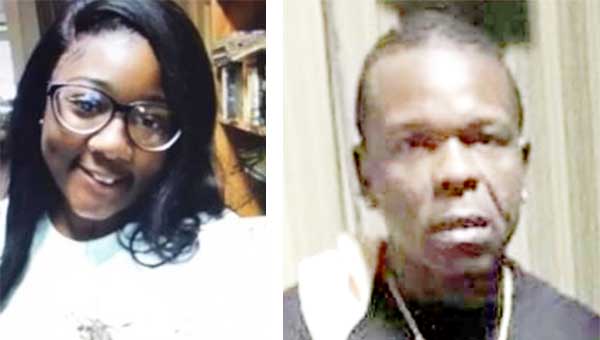 Darion Hill, right, is wanted in connection to the murder of his girlfriend Quawanda Hicks, 21, of Claiborne County.

Claiborne County, Mississippi, authorities are continuing their search for a man wanted in the murder of his girlfriend.

Claiborne County Sheriff Frank Davis said warrants have been issued for Darion Hill, age and address not listed, charging him with kidnapping and murder in the death of Quawanda Hicks, 21, of Claiborne County.

“We are looking everywhere for him,” Davis said, adding Hicks is believed to be driving a tan 2001 Chevrolet Tahoe.

Hicks’ body was found about 2:54 p.m. Thursday on Willow Road in Claiborne County by a man on a four-wheeler. Davis said Hicks had been shot and an autopsy was ordered. The couple was last seen together on Dec.19.

Yarbrough, he said, told him authorities were not aware of any connection between Hill and Warren County, but deputies will be on alert to look out for Hill.

Anyone with information about Hill or the Hicks’ death should contact the Claiborne County Sheriff’s Office at (601) 437-5161.