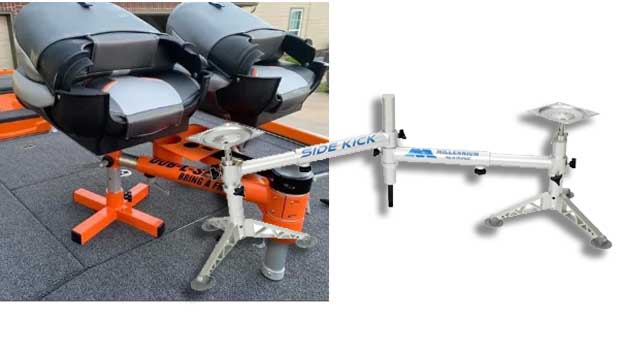 A Mississippi company accuses a rival firm of stealing its idea for a double fishing seat by making prototypes in China and then selling its version on Amazon and other online sites.

John Thomason, the founder of Dub-L-Seat, designed the side-by-side fishing seats so that friends and family could fish together on a boat, according to a lawsuit he filed recently in federal court.

Thomason “has a life-long passion for fishing and became interested in the idea of an apparatus to mount two boating seats side-by-side to enhance the experience of fishing with friends and family,” according to the lawsuit filed this month in U.S. District Court in Mississippi.

But Thomason says another Mississippi firm stole his intellectual property and is confusing customers by using similar marketing materials.

The CEO of Pearl, Mississippi-based Millennium Outdoors said Monday that he had not yet seen the lawsuit and declined comment. The company does business as Millennium Marine, and sells its “Sidekick Fishing Double Seat” on Amazon and through Walmart, Ebay and large outdoor retailers Bass Pro Shop and Cabela’s.

The dispute between the two Mississippi firms began in 2016, when Thomason applied for a patent and began discussing a possible partnership with Millennium to sell the product.

But after Millennium developed prototypes in China, Thomason told the company that he had concerns about their quality and would not move ahead with a partnership if the product didn’t meet safety standards, the lawsuit states.

It’s also seeking what it considers to be lost sales, claiming that Millennium wrongly took its intellectual property and profited from its concept.