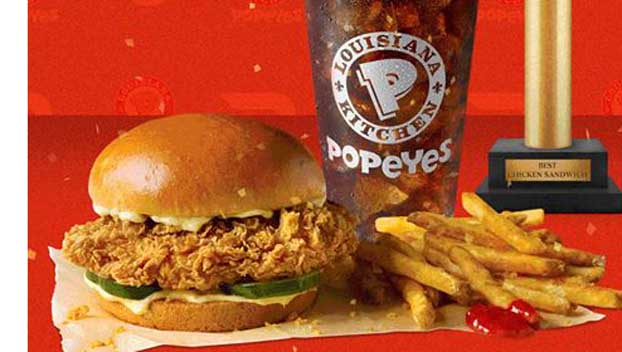 The tension in America’s chicken war just got ratcheted up a bit and hungry Americans can take advantage of promos from each side – for free (sort of at least).

Chick-fil-A and Popeyes have been taken shots at one another in a chicken war for years in some ways, but it became serious when Popeyes launched its new chicken sandwich across the country last August and, well, a lot of people liked it.

The Popeyes sandwich craze caused a rush on stores, customers clamored for the sandwich so much the company ran out and a viral American marketing frenzy ensued. A Twitter battle between Popeyes and Chick-fil-A began and the rest is chicken history.

This week, however, you can get a Popeyes chicken sandwich combo for free, but there’s a catch you have to be in an area served by delivery service provider DoorDash. If you place an order with Popeyes through DoorDash for at least $20 (now through Sunday) and use the promotion code “CHICKENWINNER” you can get the combo meal for free, along with the rest of your order.

“The positive response and demand for our new Chicken Sandwich sparked a social media frenzy and it was incredible to see this new product generate such excitement from our fans,” Bruno Cardinali, Popeyes’ head of marketing in North America, said in a press release. “We are thrilled about the continued buzz around our chicken sandwich and excited to deliver it to our loyal fans for free through our partnership with DoorDash.”

Not to be outdone, Chick-fil-A is offering its own mobile app customers a special deal for the rest of January — free nuggets!

As a way to say “thank you” to customers, Chick-fil-A is giving away a free eight-count order of classic Chick-fil-A® Nuggets to any guest who creates or signs into their Chick-fil-A One™ account via the free Chick-fil-A Mobile App.

The offer can be redeemed between Jan. 13 and Jan. 31 at participating restaurants either in-restaurant, in the drive-thru or by placing a mobile order via the Chick-fil-A App.

“Our customers are incredibly important to us, and this is one small way to thank them for their loyalty and introduce the perks of our app to new guests,” said Kevin Purcer, director of customer digital experience at Chick-fil-A. “We are excited to surprise our guests with a free eight-count order of nuggets this month through our mobile app.”

If you’re feeling guilty over eating so much fried chicken take heart, customers can exchange the free eight-count nuggets offer via the Chick-fil-A app for a complimentary kale crunch side until Jan. 31.

Think debtors prison is a thing of the past?…