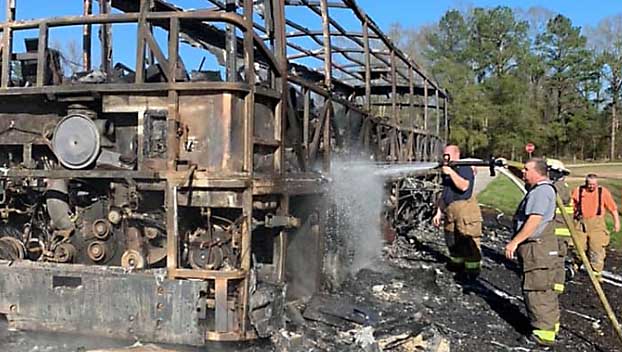 Fire and rescue officials responded to the bus fire just off Interstate 59 near the Moselle community.

The bus driver, identified by some media outlets as Juan Johnson, reported that an object fell from an 18-wheeler and the bus ran over the object, which caused the fire.

Several members of the Sigma Chi – University of Alabama Facebook group differ with the details reported, however.

In comments about the accident, members of the group (several of which claim to be parents of students who were on the buses) say the bus driver of the bus that caught fire was a female and that she fled the bus quickly, but did not evacuate the students, though all got out safely. Commenters alleged Johnson was driving another bus, making the same trip.

Editor’s note: This article has been modified since original publication to clarify details about the accident.