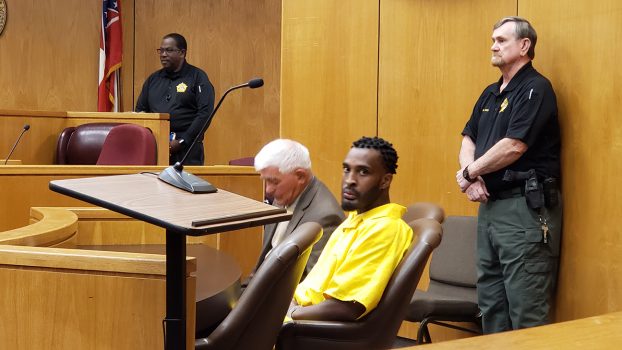 Prosecutors in the capital murder case of a man accused of ambushing two Brookhaven police officers continue to ask the State Crime Lab to hurry up with ballistics reports.

Marquis Flowers, 27, was indicted Oct. 28 on two counts of capital murder in the 2018 deaths of Cpl. Zach Moak, 31, and patrol officer James White, 35, and possession of a firearm by a convicted felon. Flowers, through his attorney, pleaded not guilty to all three counts.

Adams said the DA’s office has turned over discovery to Flowers’ attorneys, Kelsey Rushing and M.A. Bass. Those include a phone dump of a cell phone, numerous canvass sheets and DNA reports. Prosecutors are waiting for ballistics reports at the Crime Lab.

Adams told Taylor they have requested the Crime Lab “put a rush” on reports.

Bates and Adams met briefly with Flowers’ attorneys, Kelsey Rushing and M.A. Bass outside of the courtroom to discuss upcoming discovery that each plans to share.

Taylor met with all four attorneys in his chambers to discuss future hearing dates. The judge planned to schedule status hearings for Flowers each month, as needed. He set the next hearing for April 1 at 1:30 p.m. in the Lincoln County courtroom.

Bates intends to seek the death penalty In Flowers’ case.