Alabama man appears to have live-streamed his own murder 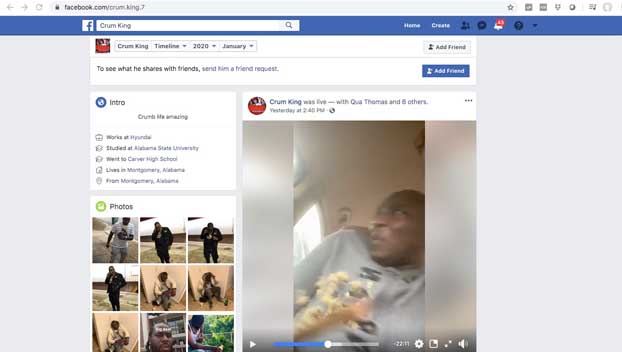 An Alabama man appears to have be live-streamed his own murder on Facebook Thursday.

Montgomery media report police have confirmed that a live video is connected to the murder of Roosevelt Rankins, 34, though they did not confirm Rankins is the man in the video.

By Friday afternoon the 46-minute video posted by the Facebook user “Crum King” had been viewed more than 275,000 times.

For the first half of the video, the man appears to be driving in a car listening to music and singing before stopping the car.

After approximately 20 minutes into the video, someone comes up to the window and the man reacts by throwing his hands up in the are before the sounds of gunfire is heard and the phone drops to the man’s feet.

The car can be heard to accelerate quickly for a few moments before a loud crash is heard.

Then a voice scream, “Call the police. Call the ambulance.”

Someone’s voice who seems to know the victim and calls him by an unintelligible name, presumably a nickname, tries to rouse him.

Minutes pass and then another voice says, “Let him go … Let him go.”