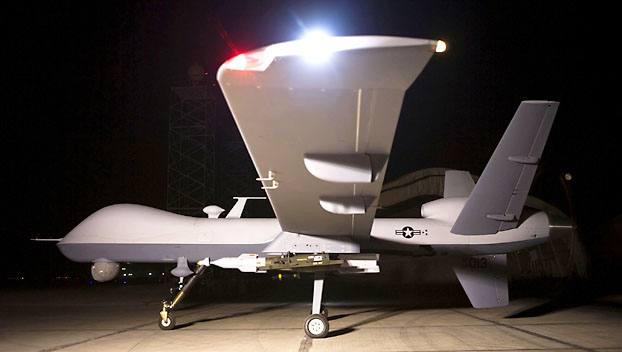 An MQ-9 Reaper sits on a ramp in Afghanistan Sept. 31. A joint military exercise in Mississippi has brought the Reaper for the first time in training exercises over the Magnolia State. (Courtesy photo)

One of Col. Rick Weaver’s priorities as the exercise director for Southern Strike 2020, was to integrate the use of the MQ-9 Reaper into the breadth of the exercise.

On Tuesday, Jan. 28, 2020, an MQ-9 aircraft launched from the Gulfport, Mississippi, airport by a North Dakota pilot on site, flew to Camp Shelby and then dropped a GPS guided inert bomb (GBU) 38 on the 201 West Shelby range.

It was one of many firsts in the nine years of the Southern Strike exercise.

Southern Strike 2020 is a large-scale, conventional and special operations exercise hosted by the Mississippi National Guard in multiple locations throughout the state of Mississippi, from the end of January to the middle of February. Approximately 22 states and almost 2,000 service members participate in the exercise.

Col. Rick Weaver said the addition of the MQ-9 Reaper, an armed multi-mission, remotely piloted aircraft, is enormous because of the integration with the different ground troops and air assets that the service members get to train with.

“We have been working for about two and a half years with the Federal Aviation Administration and other agencies to get the MQ-9 to fly from Gulfport up to (Camp) Shelby,” Weaver said.

“Southern Strike is one of the few platforms that the MQ-9 can train in multiple locations in a joint environment with three branches of the military, special forces and almost 20 fixed and rotary wing aviation platforms,” Weaver said.

Weaver said this year was the first time that they’ve been able to successfully launch the airframe from Gulfport. There are plans to go up to Naval Air Station Meridian and up to Grenada for joint exercises with special forces groups in the Army, Navy and Air Force.

Last year, the MQ-9s were brought to Gulfport and assembled only to be halted by a partial government shutdown.

The MQ-9 aircrafts belong to the 119th Wing in Fargo, N.D, one of only five Launch and Recovery Elements (LRE) in the National Guard. Once delivered, it takes several days for the LRE to assemble the aircraft before it is ready to fly.

This year, according to Col. Cindy Smith, deputy director of Southern Strike 2020, Mississippi not only played host to the Reaper, but also transported the aircraft from its home station at the 119th Wing, Fargo, N.D., to Gulfport in Mississippi C-17’s flown by the 172d Airlift Wing in Flowood.

“The MQ-9 was actually transported in a ‘coffin’, and was picked up in Fargo N.D. by three C-17s from the 172d, transported to Mississippi, and assembled at the Combat Readiness Training Center (CRTC) in Gulfport, for an exercise led in Mississippi,” Smith said.

The Gulfport CRTC is an exceptional facility to host the MQ-9, with world-class airfield space, encompassing 11,000 square miles of airspace availability from surface to 60,000 feet altitude. The CRTC is now equipped with all of the infrastructure to accommodate the aircraft for future missions or exercises.

Lt. Col. Matthew Kiser, commander of the 178th Attack Squadron, or the “Happy Hooligans” from Fargo, explained that the aircraft is launched and landed locally by the LRE here in Gulfport and run by North Dakota guardsmen during a “line of sight” take off.

The North Dakota pilot then hands over command and control of the aircraft to a pilot in Ohio’s Mission Control Element (MCE) in Springfield, Ohio. The pilot then flies the aircraft with satellite architecture.

This year also marked the first time that the North Dakota MQ-9’s have flown multiple missions at the same time.

Also a first, is the participation of five National Guard units in five states in the MQ-9’s mission for Southern Strike. Aircrew from the Iowa, Tennessee, and New York are flying remotely from the MCE in Ohio. All units are able to train with multiple guard teams and Joint Terminal Attack Controllers (JTACs), and all units have dropped GBU 12s and GBU 38s.

There are many aspects of the exercise that are beneficial to the group, Kiser said, one of which is the ability to fly in regulated airspace. This is normally not allowed by the FAA unless authorized by a Certificate of Authorization (COA). The pilots get to fly in a National Air Space (NAS), which is beneficial to an aerial asset that only gets to fly in restricted areas and warning areas without special approval.

For the exercise, the aircraft is approved to fly in the Memphis and Houston NAS, both of which have had no issues.

Next year, Kiser hopes to be able to use the warning areas to employ Air-to-Ground (AGM) 114 “hell-fire” missiles, something that most MQ-9 pilots launch for the first time in combat.

“The opportunity to train in the multi-domain environment with special forces like JTACs and Tactical Air Control Parties (TACPs) is invaluable, especially operationally in our no-fail mission requirement” Kiser said.

Kiser remarked that the training is significant because it doesn’t rely on unnecessary sacrifice.

“The MQ-9s are always forward (deployed) so this is a great opportunity to train in an environment we can make mistakes and learn from them before we get to theater. We haven’t had that option before,” he said.

Capt. Tim Webb, a pilot from the 178th Wing in the Ohio Air National Guard, said the exercise and the CRTC in Gulfport provides a perfect location for the training they desire.

“We are primarily training for close air support, physical drops of GB-12 and GB-38 inerts, but here we get to do fast attack craft (FAC) fast inland attack craft (FIAC) which is something very unique to Southern Strike,” Webb said.

“We rarely ever get that type of exposure.”

Murder trial to begin for Mississippi man accused of…