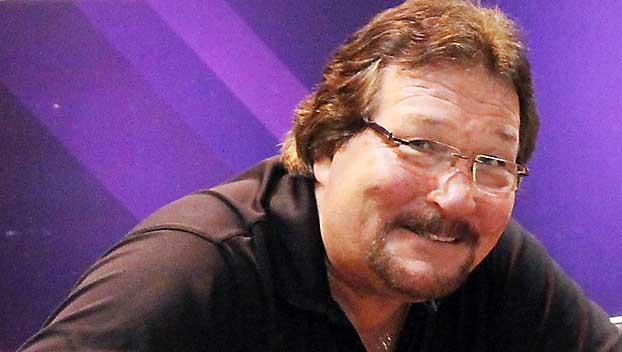 The state of Mississippi gave more than $2.1 million in federal welfare money to a ministry run by former pro wrestler Ted DiBiase Sr., who was known in the ring as “The Million Dollar Man.”

DiBiase is the father of a man recently indicted on charges of embezzling federal welfare money from the state. Ted DiBiase Sr. himself hasn’t been indicted.

The Clarion Ledger reported that DiBiase’s Heart of David Ministries had a contract with the Mississippi Department of Human Services for a subgrant of Temporary Assistance to Needy Families funds.

As a wrestler, Ted DiBiase Sr. wore a golden championship belt and suit adorned with dollar signs. He later turned to preaching and formed a nonprofit in Mississippi called Heart of David Ministries.

His son, Brett DiBiase, whose own wrestling career was derailed by injury, was one of six people indicted last week on charges of embezzling more than $4 million in federal welfare funds.

Brett DiBiase was hired in February 2017 by the Department of Human Services at a $79,000 salary, according to state Personnel Board records.

Then-director John Davis promoted him on Aug. 1 of that year to deputy director of transformational change, with his salary rising to $95,000. However, DiBiase was gone six weeks later, and indictments allege Davis and department employee Latimer Smith faked invoices to channel $48,000 so DiBiase could attend drug treatment in Malibu, California.

Social media accounts indicate the training took place in late 2018 and early 2019. The leaders of the Mississippi Community Education Center — Nancy New and Zach New, were charged with stealing more than $4 million in welfare funds that Davis directed to the nonprofit center, which was supposed to help indigent people find work, childcare and education.

Heart of David Ministries saw its revenues double in the year Brett DiBiase was hired by the state, tax exemption filings show. The nonprofit described its mission as “religious education and training” in those filings. It reported spending 2017 grant money on “general church speaking engagements, religious conferences, school assemblies, and wrestling events.”

It’s unclear exactly how Heart of David spent all $2,126,739 it received from May 2017 through earlier this budget year. It pledged in one 2018 contract to “establish a network of partnerships, services and resources throughout Mississippi communities for faith-based and self activities.”

Department of Human Services spokesman Danny Blanton said Davis decided to hire Brett DiBiase and distribute money to Heart of David. Davis did not hold open competitive proposals for the department’s welfare subgrants, with Blanton saying he often would “unilaterally” distribute the money.

A woman who answered the door at the home of Ted DiBiase Sr. in Clinton called the Clarion Ledger’s past reporting “fictitious.” She declined to comment. Attempts to reach directors and others connected to Heart of David Ministries were unsuccessful.

DiBiase has said he became a Christian minister after struggling with alcohol and drugs and cheating on his wife while on the road for wrestling events.

“I was traveling the world in Lear jets and limousines. I had it all, but I had succumbed to those things on the road that take us away — the drugs the booze and the women,” DiBiase told former Arkansas Gov. Mike Huckabee in a 2017 interview. “I had put the most important things in my life at risk to stroke my ego.”

Heart of David’s government grants jumped to $271,000 in 2017, the year Brett DiBiase was hired at the Department of Human Services. DiBiase Sr. was paid $84,517 as president of the organization.

As Heart of David received its first infusion of cash in 2017, filmmakers were completing “The Price of Fame” — a movie about Ted DiBiase Sr.’s struggles and religious awakening.

A trailer for the film said it was made in association with Heart of David Ministries, but the producer and manager behind the film said the nonprofit was not involved. Blanton said the agency has not found signs state funds were used for the movie.

Jury set in murder trial of man accused of…