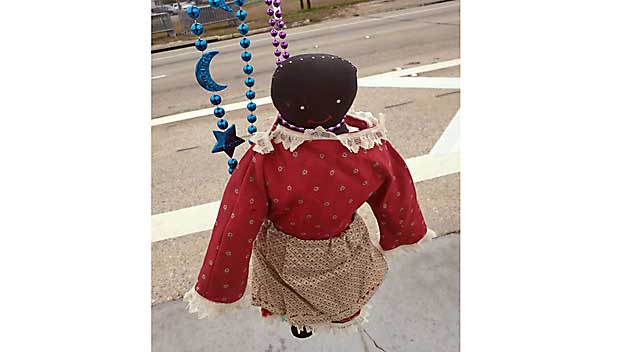 A 12-year-old-girl received a black doll with beads forming a noose around its neck at a Mississippi Gulf Coast Mardi Gras parade, and officials said Monday that police were investigating the incident as a hate crime.

Nicole Fairconeture of Pass Christian said she and her family were attending the Krewe of Nereids parade Sunday when a man riding on one of the floats called her daughter to get a Mardi Gras throw.

“She grabbed the item, put it to her chest, and was coming back and he called her back,” Fairconeture told The Sun Herald newspaper. “When she turned around, he said, ‘That’s you.'”

The doll was black and “was dressed like a slave,” Fairconeture said.

The upset mother found police and handed the doll to the officers; her uncle later filed a police report.

Waveland Mayor Mike Smith said the incident is being considered a hate crime, with both Waveland and Bay St. Louis police working on the investigation.

“When I seen that it had happened, it infuriated me,” Smith said.

He said police were trying to track down the float, because three separate floats were decorated in the same way, with a black and gold New Orleans Saints theme. The Krewe of Nereids said it was investigating the matter.

“We’re steady getting messages and leads as to what truck (and float) it is so we can get to the bottom of it,” Smith said.

The Krewe said via a social media post that the suspected float was not officially part of the parade.