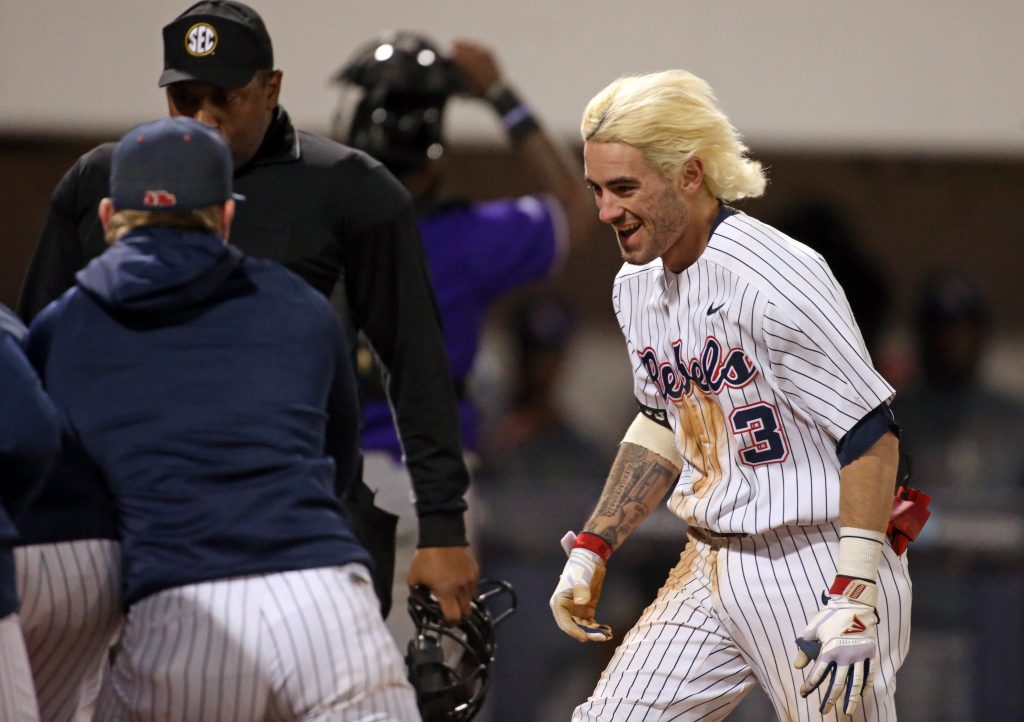 Just days after besting the No. 1 team in the nation, the Ole Miss Rebels got a scare Wednesday from Alcorn State. It took a walk-off home run by Anthony Servideo in the 10th inning to give the Rebels the win. (Photo by Petre Thomas/Ole Miss Athletics)

Inexplicably, Ole Miss couldn’t back-up a weekend upset over the nation’s No. 1 team without a little midweek extra-innings drama.

The Rebels needed their best player to come through in walk off fashion on Wednesday, a tenth inning home run by Anthony Servideo to escape a scare and beat Alcorn State 9-8 in extras.

“It’s easy to look at this game, especially the box score, and point to the hangover effect,” said head coach Mike Bianco. “I don’t necessarily think it was that. We didn’t play well. But you have to give them credit, they played really well.”

Ole Miss pitcher Greer Holston has had a rough go to start the 2020 season, and every season since 2018 in that regard. Holston made just one appearance a year ago, dealing with the so-called ‘yips.’ Yet, the senior battled back, impressing in the fall and early spring to earn his position back in the rotation to start the season.

Over opening weekend, Holston allowed two hits and one run while recording just one single out. Starting on Wednesday night against Alcorn State, Holston allowed three hits, two walks and four runs in the first inning, all without recording an out. In two appearances to start the season, his ERA sits at 135.00.

Down an early 4-0, Ole Miss slowly battled back. The Rebels scored two in both the second and third innings, headlined from homers from both Knox Loposer and Tyler Keenan, to tie the game up at 4-4 after three innings.

A string of three singles scored the Braves run in the fourth where Ole Miss tied it up, yet again on a fielders choice RBI, Keenan’s second of the game.

Alcorn second baseman Tristian Garcia had himself a day in Oxford. In the top of the seventh after two more Rebel runs in the sixth, Garcia went deep off of Logan Savell for his fourth hit of the ballgame. Two batters later, Austin Miller allowed another home run, thus tying the score again at 7-7.

“We just didn’t have an answer for him all night, with a bunch of different pitchers,” Bianco said. “Fastballs, breaking balls, different sides of the plate, you just have to tip your hat.”

Yet, Alcorn strung together three hits and a walk in the ninth tying it up themselves at 8-8 and eventually sending it to extras at 8-8 after a one-two-three bottom of the ninth.

Over the course of nine innings, Alcorn State walked nine batters and committed four errors, yet the game was still tied.

In the end, it was the Rebel who has pulled through in every single Ole Miss game through the early season that ended the game. Anthony Servideo went deep to right field, his second homer of the year is a mid-week walk off. Final score: 9-8 in 10 innings.

“I was trying to end it; I’m going to be honest,” Servideo said. “We let them hang around too long. It shouldn’t have went ten innings, but I’m really proud of the way the team fought through ten innings and we came out with the win.”

With the win, Ole Miss advances to 3-1 on the year. Next up: a three-game series over the weekend with Xavier.