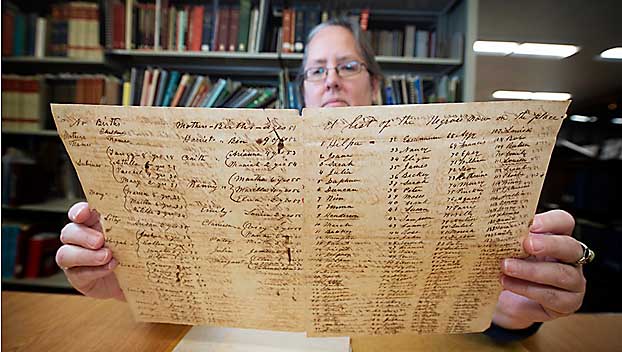 MSU Libraries Coordinator of Manuscripts Jennifer McGillan, program director for the Lantern Project, evaluates one of many historical documents for prospective digitization. If selected, a copy of the record will be made available to the public for free upon project completion. (Photo by Megan Bean)

The Lantern Project is one of only a few in the South and is funded by a $340,424 grant from the National Historic Publications and Records Committee, a branch of the National Archives. In addition to MSU Libraries, the University of Mississippi Libraries, Delta State University, the Historic Natchez Foundation, Columbus-Lowndes County Public Library and the Montgomery County (Alabama) Archives also are participating.

This undertaking compiles a wealth of 19th-century documents from across the South and, upon completion, will provide a fully text-searchable, indexed collection containing digital images of original documents that include individuals’ names and detailed physical descriptions. Primarily inspired by patron need, the project is based on a similar effort at the Virginia Museum of History and Culture called “Unknown No Longer.”

The database will utilize records created or used by slave owners or the legal system to track enslaved persons, such as inventories, bills of sale, and probate and other court records, which will allow scholars and genealogists to trace victims’ movements and empower descendants to uncover their ancestries and reconstruct family trees impacted by slavery.

Previously, records of this nature have been identified and transcribed by African American genealogist-led projects such as www.afrigeneas.com and www.ourblackancestry.com.

Additionally, the three-year project will illustrate the realities and operations of the Deep South’s slave economy, including the mechanics of slave owners buying and selling human beings as an accepted practice during that time.

Jennifer McGillan, coordinator of manuscripts for MSU Libraries, is the university’s primary organizer for the effort which she said contributes to existing research from the genealogical and African American communities. The database also will help eliminate barriers such as a lack of proximity to physical records and difficulty reading 19th-century handwriting.

“Currently, what individuals can find is limited by their ability to access collections.” McGillan said. “MSU Libraries deeply respects the work African American genealogists have done, and our goal is to make their lives easier.”

McGillan said formerly enslaved persons were not named in the U.S. Census until 1870, which makes locating earlier records even more difficult. The Lantern Project was named to not only reflect researchers’ desire to shed light on these records, but also to recognize enslaved persons’ experiences of family separation.

“It was as if their relatives had vanished into darkness, never to be seen again. This was primarily because nearly all enslaved persons were forbidden to learn to read or write, so it was extremely difficult to reconnect families after they were separated,” McGillan said. “The Lantern Project hopes to turn on the lights, illuminate the paper trail and reconnect individuals with their families.”

One of the collections that will be featured in MSU’s contribution to the project will be the Todd A. Herring Collection. Donated to Special Collections in 2009, the Herring Collection features a variety of documents related to enslavement in Mississippi, including mid-19th-century freedom papers, individual bills of sale and plantation correspondence. Herring, a former Lincoln University professor of history whose specializations include enslavement and the slavery-based cash crop culture in the antebellum Lower Mississippi Valley, earned his Ph.D. from MSU in 2000.

As in much of the South, slavery played a large role in Mississippi’s socioeconomic structure and population development. The state had approximately 437,000 enslaved persons by 1860, compared to 33,000 in 1820. Mississippi’s plantation wealth and economy depended on enslaved individuals who harvested cash crops such as cotton in grueling, labor intensive processes.

While many were born into captivity or bought and sold among white plantation owners, others were often mortgaged or served as human collateral for loans.

Donald Shaffer, MSU director of African American Studies and an associate professor of English, said the Lantern Project will lend visibility and legitimacy to an era of history that is often erased or seen through rose-colored glasses.

“Enslavement is a deeply personal narrative involving human beings, and seeing that experience firsthand brings that home,” Shaffer said. “We need to take an unflinching view because we have to tell all stories, even those that might be difficult, if we want to grow as a society, civilization or nation.”

NHPRC grant funds are being used by MSU Libraries to create the digital database, purchase a book scanner and digitize and transcribe records in its own collection, as well as those held by Delta State University Libraries and the Historic Natchez Foundation. The award also will support the employment of history and computer science graduate students who will assist MSU staff. Other grant funds will be disbursed to the University of Mississippi, Columbus-Lowndes Public Library, and the Montgomery County, Alabama archives to support digitization, preservation and transcription of records held by these organizations.

The project team includes archivists and preservation professionals from all of the participating institutions. While MSU Libraries will host the main database, copies of digital images and metadata will be stored by participating institutions where possible, and distributed to relevant state digital libraries and the Digital Library of American Slavery at the University of North Carolina-Greensboro.

In addition to these efforts, faculty at participating institutions will offer public instructional workshops on use of the database at local campuses and at historically black colleges and universities in Mississippi and Alabama. MSU’s annual E.O. Templeton Jr. Genealogy Fair in June will include one of these workshops, and additional instruction will be held at other genealogy and history organizations by request.

Special Collections houses a variety of documents related to enslaved persons and plantation life, including the Duncan Blackwell Collection, the Lenoir Family Plantation Papers and the Drennan Love Collection, among others, in addition to the Herring Collection.

For more information about the Lantern Project, contact McGillan at jmcgillan@library.msstate.edu or 662-325-3071. Visit MSU Libraries at http://lib.msstate.edu/.

This article was produced by Mississippi State University.