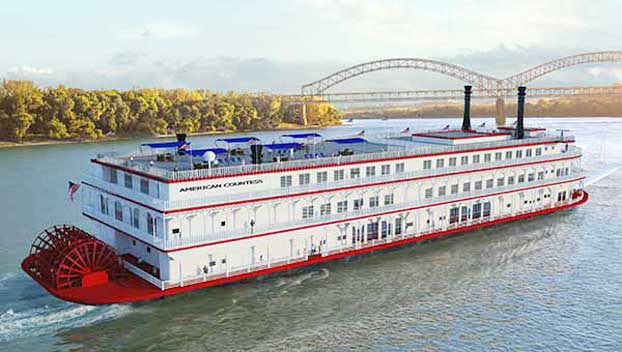 The American Queen Steamboat Co. says its newest cruise paddlewheeler has passed its second sea trial and will make its first cruise in April from New Orleans to Memphis.

The 245-passenger American Countess went through the Intracoastal Waterway from Houma — where Gulf Island Shipyard cut it in half and added 60 feet (18 meters) to its length — to Morgan City, Louisiana, as part of its trial, the company said in a news release.

The ship is now 318 feet (97 meters) long. It will move to New Orleans in late February for four weeks of finishing touches.

The American Countess was built on the hull of the Kanesville Queen, which was part of a Harrah’s casino in Council Bluff, Iowa, for 17 years before being scrapped in 2013.

American Queen Steamboat Co., based in New Albany, Indiana, has three other paddlewheel cruise boats. One works in the Pacific Northwest. The American Countess will be the third traveling along the Mississippi River and its tributaries.

It is to be christened April 4 and to begin its first cruise April 5.