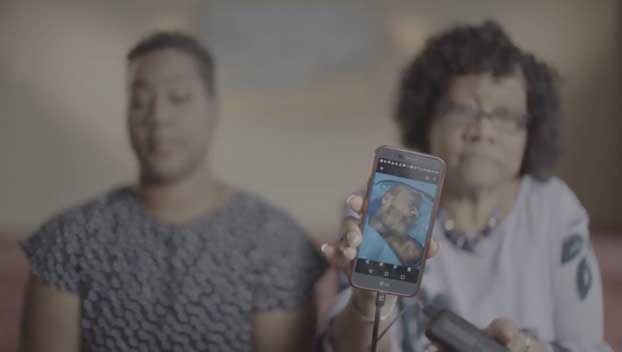 Sandra Mills, right, holds a phone showing an image of the dead body of her son, A.D. Buddy Mills Jr., who died shortly after being transported to Parchman prison. Her daughter (and A.D. Buddy Mills' sister) Claudia Mills is on the left. This image is a still frame taken from a video produced by Roc Nation.

Shawn “JAY-Z” Carter, Mario “Yo Gotti” Mims and Team ROC – the philanthropic arm of Roc Nation – have procured legal representation for 150+ inmates and have filed a second, civil lawsuit against the Mississippi Department of Corrections.

With the lawsuit, Carter, Mims and Team ROC are calling for the court to order the Mississippi Department of Corrections to immediately address the barbaric prison conditions at the Mississippi State Penitentiary at Parchman and develop a plan that will eliminate the health and safety risks for inmates within 90 days.

Inmates at Parchman have been forced to live in deadly environments that lack clean water, adequate food, electricity, heat, access to healthcare and clothing, among many other basic human necessities. Visuals of the inhumane conditions at Parchman can be viewed at http://teamroc.io/mspsa – please be advised of the graphic content.

The 150+ inmates elaborated on their deplorable living situations in detail, noting in the lawsuit:

Due to these cruel and torturous living conditions, internal riots have surfaced at Parchman since December 29, 2019 and at least nine inmate deaths have occurred because of suicides, homicides and miscellaneous cases that have classified as “natural deaths.”

As part of this lawsuit, Carter, Mims, Team ROC and the 150+ inmates are asking the court to retain full jurisdiction of the Parchman Penitentiary until the Department of Corrections have fully remedied the situation and ensured a safe, livable environment.

Today’s filing follows a previous lawsuit that JAY-Z, Yo Gotti and Team ROC submitted in early-January on behalf of 29 inmates against the Mississippi Department of Corrections, paving the way for the Department of Justice to launch an investigation into Parchman.

JAY-Z is an American rapper, music producer and songwriter.

Yo Gotti is an American rap music artist from Memphis.