Severe storms may march across Mississippi in first week of March 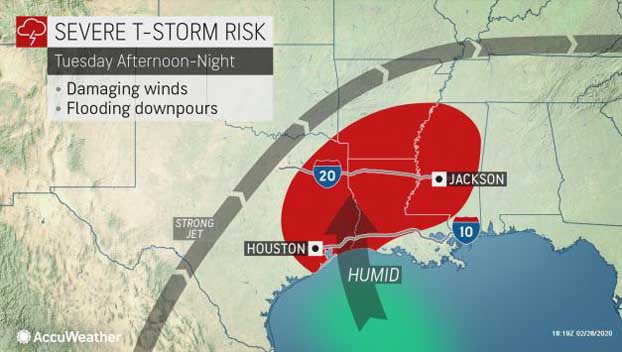 Forecasters are putting out an early alert for the potential for severe thunderstorms to march across the southern United States next week.

AccuWeather meteorologists say that although the exact severity and coverage of the thunderstorms will need to be ironed out in the coming days, the upcoming pattern next week bears close monitoring, specifically for residents from Texas to the Deep South.

A strong jet stream will divide cold air to the northwest and warm, moist air to the southeast over the center of the nation during the first days of March.

“Whenever you get a big temperature difference or different air masses in close proximity to each other, you get a storm and we’re going to see that Tuesday into Wednesday,” AccuWeather Chief Broadcast Meteorologist Bernie Rayno said.

This storm is likely to renew flash and river flooding concerns from the lower Mississippi Valley to the Tennessee and Ohio valleys as it unleashes widespread heavy rainfall. But AccuWeather meteorologists are concerned that flooding will not be the only hazard.

“There’s at least a chance, and I believe at this point it’s a good chance, for severe weather late Tuesday into Wednesday from east Texas toward Louisiana, Mississippi and Alabama,” Rayno said.

There is the potential for the severe weather threat to shift farther to the east later in the week.

“Depending on the buildup of warmth, moisture and how the jet stream interacts with those parameters will determine if severe thunderstorms occur in the southeastern corner of the nation Wednesday night to Thursday,” according to AccuWeather Senior Meteorologist Alex Sosnowski.

“During March, when push comes to shove, I think you have to lean toward severe thunderstorms in the South versus non-severe weather because of the building warmth and the presence of the strong jet stream overhead,” he added.

Whether just a few severe thunderstorms erupt or a full-blown multiple-day outbreak of violent weather occurs will depend on a variety of factors in the atmosphere which will become clearer over the coming days. These factors include, but are not limited to, extent of rain and cloud cover, thunderstorm timing and strength and degree of turning of the winds a few thousand feet above the ground.

If all of the necessary ingredients come together, isolated tornadoes could accompany the damaging winds, frequent lightning strikes and hail that are common in severe thunderstorms. Flash flooding will also be a major concern given how saturated the ground is across the region.

Airline delays could hit the major hubs of Dallas, Houston and Atlanta during the middle days of next week.

AccuWeather meteorologists are actively monitoring the situation and will continue to provide further details on the timing, extent and intensity of next week’s thunderstorms in the days ahead.