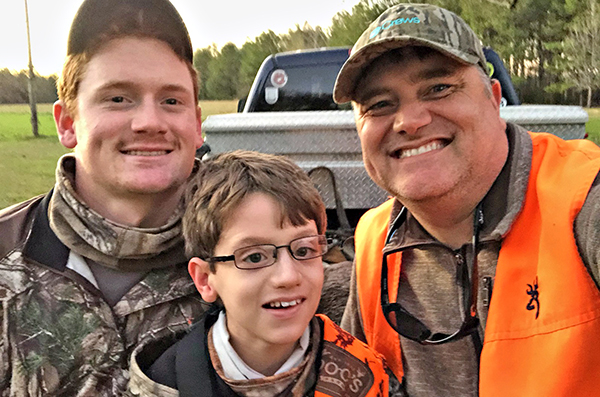 Riggs Shealy, center, sits with older brother Grayson (left) and father Chad (right) during a hunting trip in January. The trip was arranged by Hope Outdoors, an organization that provides hunting trips to people with disabilities. Riggs has AUTS2 Syndrome, a rare type of autism. (Submitted to The Vicksburg Post)

For 10 years, Riggs Shealy lived in a world of silence.

Afflicted with an extremely rare genetic disorder, loud noises — even common ones — sent the child into a panic.

“He couldn’t even stick his hand in a chip bag two years ago. We’d be in a restaurant and somebody would drop some silverware and we’d have to leave,” said his father, Chad.
One Saturday in January, that all changed.

In a quiet wooded area in Stone County, Riggs sat behind a rifle with a deer in his sights. He, his family, and a team of volunteers had been working toward this for months.

As the deer closed in, Riggs lined up the shot and pulled the trigger. The soft tap of a suppressed rifle sent the bullet downrange and opened up a whole new world.

A QUIET WORLD
Riggs was born with AUTS2 Syndrome, which is a rare form of autism. Only about 50 people worldwide have been diagnosed with it, and Riggs’ diagnosis did not come until he was 6.

Like many forms of autism, AUTS2 manifests in different ways with different people. For Riggs, it was an aversion to loud noises.

Like most little boys, however, Riggs eventually wanted to tag along with his father and older brothers when they did stuff.

Chad admits he was overprotective early on, but everything changed last summer when he was contacted by representatives from the Mississippi Wildlife, Fisheries and Parks Foundation’s Super Hunt program.

Riggs Shealy, center, stands over the deer he killed on a hunting trip with Hope Outdoors in January. Pictured with him are his father, Chad, brother Grayson, and several guides and volunteers. (Submitted to The Vicksburg Post)

The Super Hunt is a supervised deer hunt for children with disabilities. Chad, who is superintendent of the Vicksburg Warren School District, was contacted to see if there were any children in Warren County who might want to sign up. During the conversation, Riggs’ name came up.

“I didn’t want to take another kid’s slot. She said, ‘Don’t worry about that,’” Chad said.

And, with that, the Shealys started to craft a plan that would allow Riggs the opportunity to hunt. After all, even if the desire to hunt was there, the reality of the noise-sensitive Riggs handling the sharp crack of a rifle still had to be dealt with.

The plan was to build Riggs’ tolerance and skill by working with silent weapons. A few weeks of practice with a Nerf gun and a life-size deer target gave Riggs the confidence to move on to a crossbow. In the meantime, the search was on for a suppressed rifle he could use for the actual hunt.

In October, just in time for the Super Hunt, Riggs shot a rifle for the first time.

Riggs did not shoot a deer during the Super Hunt. That would have to wait, but not for long.

HOPE RISES
After the Super Hunt in October, Chad was contacted by an organization called Hope Outdoors. Similar to the Super Hunt program, it is a non-profit ministry that arranges hunts for children and adults with disabilities.

After the success in the fall, Chad and Riggs were both ready to go on another hunt. The hard part was, once again, finding a suppressed rifle. The one they had used at the Super Hunt belonged to someone else, and because the weapons are highly regulated another needed to be found for the Hope Outdoors trip in late January.

Shane Breland, the director of the Wiggins chapter of Hope Outdoors, said the volunteers in his organization scoured the state before finally locating an AR-15 rifle with a suppressor. To further limit the noise, they used a slower .300 Blackout round.

The weapon Riggs Shealy used to kill a deer on his Hope Outdoors trip is shown. The AR-15 had a suppressor and used an iPhone attached to the scope to help Riggs, who has a rare genetic condition that makes him sensitive to loud noises, have a successful hunt. (Submitted to The Vicksburg Post)

“The challenge was the limited number of suppressed guns, was finding one with limited recoil and suppressed sound. It took us a month or so to find all that,” Breland said. “I sent out a mass text to all of my guides, and three or four weeks later somebody said, ‘I’ve got one!’”

With everything arranged, the Shealys headed to Stone County near the Coast for their next excursion. Even with months of preparation, no one was sure exactly what might happen.
“He may go out there and kick turnips for 30 minutes and that’s it,” Chad said. “We had never done anything like this. My other two boys hunted. One killed a deer when he was 5 and the other when he was 6, but it was never an option for Riggs.”

A swarm of volunteers from Hope Outdoors, as well as his father and older brother Grayson, helped Riggs get settled in a blind and got the rifle set up and stable. An iPhone was connected to the scope to assist with aiming. From there, it surprisingly only took a few minutes for a deer to wander into range.

Riggs lined up the shot, pulled the trigger, and immediately stepped into a bigger world.

“It was amazing. It’s something we’ve been working for all season. He feels like my child. He’s my best friend. It’s just something else getting to see somebody that you care about kill one. Especially him,” said Grayson Shealy, Riggs’ 19-year-old brother. “He would get a little fidgety sometimes, especially if he had fallen asleep. But he was excited. He was ready. He got up there and eased his finger on it. We’ve got pictures of him pulling the trigger and grinning ear to ear. He smoked it.”

“It was a miraculous moment for a daddy who never thought he’d hunt with his little boy,” Chad said. “He doesn’t get to do a lot of things other little boys get to do, and for him to have a team of people making it possible to have a weekend with his daddy was awesome.”

Breland said the joy wasn’t limited to just Riggs and his family.

“It’s hard to put into words seeing him and his dad do something we can do on a regular basis,” Breland said. “Seeing the pure joy in their eyes and faces, it touches everybody around you. Having a small part in making that happen is a true blessing.”

THE NEXT STEP
The experience, Chad said, has changed their lives. Riggs has had more confidence since the hunt and is eager to go again. A turkey hunt — using a silenced shotgun — is on the calendar in March.

Riggs also won a $250 scholarship for being the most improved hunter at the Hope Outdoors event.

“There’s a possibility of him being part of the family tradition of hunting. Every time he sees camo and deer, he’s like, ‘Hunt!’” Chad said. “When you talk about being a dad with disabilities, we’re overprotective of him. That’s changed now. He’s able to do stuff. It’s broadened what I think he can do, and allowed him to do, and not be so protective.”

The Shealys also added they were thankful to all of the volunteers from the Super Hunt and Hope Outdoors that helped them achieve this goal. A small army worked behind the scenes to bring about a perfect ending to a long journey.

“It’s just something special. With everybody else that was there to help him, it’s unique to have somebody who cares to help and not get something out of it,” Grayson said. “Everybody was there to help him get his first deer. Dad and I never thought we’d be able to share that experience with him. It’s just amazing. Every little accomplishment Riggs does is amazing to us. Getting to kill a deer is something special.”

All eyes on coronavirus. Where is Mississippi most at…