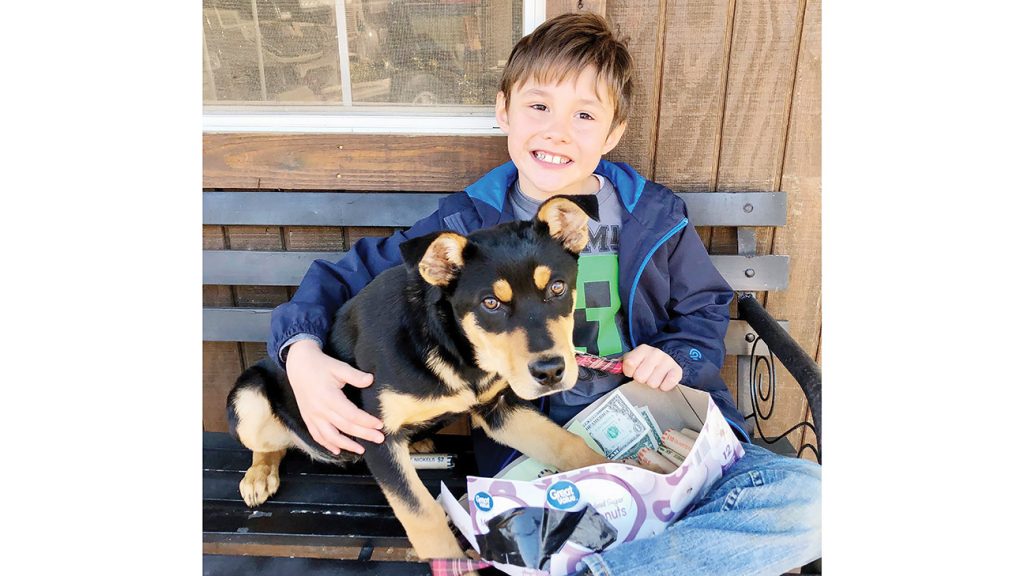 Photo submitted Eight-year-old Tyler Donie saved pennies and other change until he had enough to pay adoption fees for a puppy from Brookhaven Animal Rescue League. Fittingly he named his new fur friend Copper.

So the Brookhaven boy did what any determined young man would do — he began saving all the coins and bills he could until he had what he needed to pay the adoption fee for a dog. He asked his mom, Diane Calvitt, to take him to Brookhaven Animal Rescue League so he could pick out a new friend.

BARL board chairman Rusty Adcock said the shelter just wants to make sure the potential pet owners are matched well with the animal they choose.

“Once they consider the dog they want,” Adcock said, “if they are any special needs we know of, we’ll try to get that sorted out.”

The goal is to make sure the person and the animal match well, Adcock said. Shelter volunteers will talk about personality traits they’ve noticed in the dog or cat during its time at the shelter, whether the animal typically tries to run away and should be in an enclosed fence, or any other concern or trait they think should be mentioned. If an adoption is completed and the personalities of the owner and pet don’t mesh, the animal can always be returned to the shelter, so a better match can be made.

“We’re really just looking for the welfare of the animal,” Adcock said.

The adoption process is not difficult — once an animal has been chosen, it’s just a matter of filling out an application and paying the adoption fee.

Fees are $85 for dogs and $75 for cats, prices the rescue league believes the market will bear, according to Adcock. With vaccinations and other shots, spaying or neutering, cost of food and shelter — plus microchipping for dogs and specialized tests for cats — the price BARL charges is about half the cost of taking an animal to a veterinarian for all those things, or even less.

When Donie had made his decision on which dog he wanted, he presented his savings — collected in a cardboard donut box — to BARL and took his black and tan furry friend home.

He named his new pal Copper, just like the shiny pennies he’d saved.

The shelter, located at 501 North Park Lane, is open for visitors and potential adopters Tuesday-Sunday, 1-4 p.m.