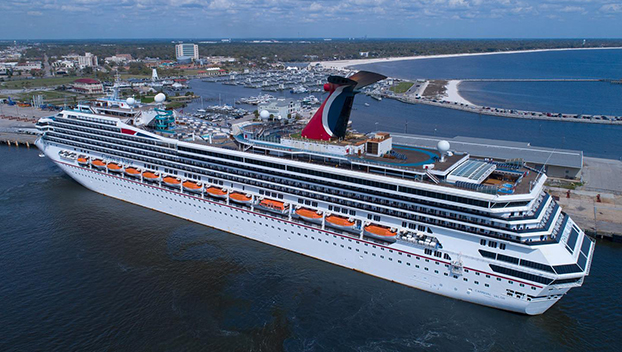 Two crew members from a cruise ship docked on the Mississippi Gulf Coast were seen leaving the Port of Gulfport Sunday despite safety precautions set in place to prevent further spread of COVID-19.

Port of Gulfport Executive Director Jonathan Daniels told WLOX in Biloxi that the Customs and Border Patrol made a “mistake” when they cleared the crew members to leave the Carnival Valor cruise ship.

“As a protocol, Customs and Border Protection cleared the ship. Two crew members were cleared to ‘sign out’, and then the news of their departure was conveyed to the ship’s captain. Arrangements were then made for them to fly out,” Daniels told WLOX.

A television viewer shared photos of a man and woman walking off the property with a suitcase.

Carnival Cruise Line announced it would dock ships from New Orleans in Gulf Port. As a safety precaution to prevent further spread of the coronavirus, the cruise line said none of its crew members would be allowed off Port property and into the gulf coast community.

Daniels told the television station “this was a mistake made by CPB … no one should be exiting the port.”

Since the incident, Carnival reconfirmed that sign-outs will be prohibited and that a guard has been hired to ensure that any further errors do not happen again.

The cruise line refutes statements by an Ohio television station that reports a passenger diagnosed with COVID-19 was a recent passenger aboard the Carnival Valor.

“We have not been contacted by Columbus, Ohio public health authorities about this matter. In addition, we have reviewed the medical case history on the ship of the last three cruises dating back to February 29 through today, and there has not been any guest or crew who have been seen with any influenza-like illness,” the cruise line stated.