Former Mississippi pastor: ‘Never dreamed that I would be diagnosed with COVID-19’ 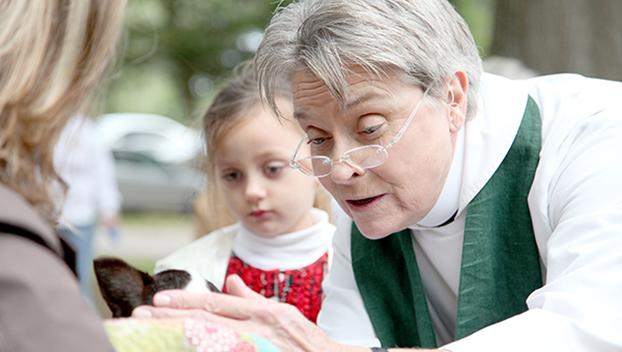 Rev. Billie Abraham, who retired last year as rector St. Albans Episcopal Church, is continuing to recover from contracting the COVID-19 virus on a trip to New York earlier this month. She now lives in Santa Fe, N.M. (File Photo/ The Vicksburg Post)

When the Rev. Billie Abraham returned from a trip to New York, she brought home an unwelcome guest — COVID-19.

“I caught it in the airplane returning from New York City, where I went to visit my daughter, her husband and their baby,” said Abraham, who retired as rector at St. Alban’s Episcopal Church in Bovina and now lives in Albuquerque, N.M. “I was also told that someone else on the plane had contacted COVID-19.

“I was told I was the third person in New Mexico who was diagnosed, but that was because they had just started testing. I’m sure there were other cases.”

Her ordeal with the virus began March 8.

“I was at the cathedral (in Albuquerque, N.M.) and I noticed I was having chills. Later, I went to dinner with some people,” she said. “I just thought I needed an extra sweater. I didn’t think I was sick. (But) that was one of the first symptoms.”

The next day, Abraham said, “I knew I had the flu. It was that aching all over and high fever. It was the symptoms of the flu. I just never dreamed that I would be diagnosed with COVID-19.”

She went to a walk-in clinic that Monday, and the doctors there ran a series of tests that eliminated several possible illnesses like strep throat and the flu.

When an X-ray indicated she didn’t have pneumonia, “They called the (state) Health Department because I had traveled; that was the red flag — that I had traveled on a plane.”

The next day, Abraham learned she tested positive for COVID-19.

During her 10-day battle with the virus, Abraham said she experienced aches and fever, “Just like the flu. I was very fortunate; I didn’t have the congestion.”

Wednesday, she received approval from the state Department of Health to leave her home.

“The (Centers for Disease Control) changed the recommendation from having to be tested two more times and get a negative testing, to being free of fever for three days,” she said Wednesday.

Abraham said the health department assigned a person to her, who called periodically to check on her. She took her temperature and reported it to her aide.

“I’m really not planning on doing anything today (Wednesday), but I am planning on getting out and walking a little bit tomorrow,” she said.

Abraham said Wednesday she still did not feel good.

“I just think (it’s) because I’ve eaten so little; I just don’t have an appetite. I haven’t been out and about. I haven’t moved but from one room to another inside my house,” she said. “I’m looking forward to walking around the block a couple of times.”

The frightening thing about her experience, she said, “Is that it’s out there, and we just don’t know when it’s contagious. I don’t have any advice except be careful, and staying away from people is a safeguard; you’re not going to catch it if you’re not around people.”

Since word of her illness got out, Abraham said, she has received text messages from people in Mississippi.

“It has been such a gift to hear from them,” she said.

And she may think twice about flying, even to New York City.

“I think my next trip will be a road trip,” she said.