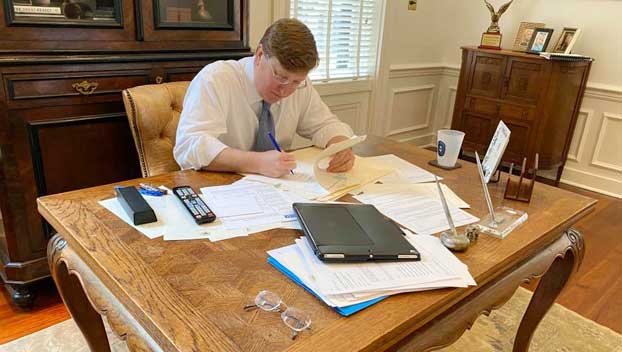 Mississippi Gov. Tate Reeves signs HB 1647 last week to clear the way for teachers and other state workers to receive pay during the coronavirus shutdown. (Courtesy Tate Reeves via Facebook)

Mississippi Gov. Tate Reeves faced intensifying criticism on Monday from some local officials and state lawmakers who said that to help slow down the spread of the coronavirus, Reeves needs to issue a statewide order for people to stay at home unless they have essential jobs or are getting groceries or prescriptions.

“Mayors and local leaders are putting in place differing curfews and orders. This patchwork system is creating public confusion that will result in panic,” Democratic state Rep. Jarvis Dortch wrote on Twitter.

Republican Reeves led a prayer session Sunday on Facebook and suggested that people avoid congregating in large groups, but has not ordered business closures or limits on social behavior, in contrast to a growing number of other governors, including in next-door Louisiana, who have ordered people to stay home.
“‪Stay home if you can. Avoid gatherings of 10 or more people. Stay safe. Look out for your neighbors,” Reeves wrote Monday on Facebook.

Reeves last week ordered public schools to remain closed until at least mid-April. He said Monday: “‪we will have more orders and actions very soon — following the lead of our experts.”

The Mississippi State Department of Health on Monday reported the state had 249 confirmed cases of the coronavirus as of 6 p.m. Sunday. The department said one Mississippi resident has died of COVID-19; he was a Hancock County resident who had underlying medical conditions, and he died last week in a Louisiana hospital.

Several medical facilities in Mississippi are now providing coronavirus testing to people with fever and “severe cough or chest pain,” and screening began Monday for people to get appointments for a drive-thru testing site that opens Tuesday on the Mississippi State Fairgrounds.

Vicksburg is setting a city-wide curfew beginning Monday from 11 p.m. until 5 a.m., according to Mayor George Flaggs Jr. People are not allowed to be on city streets during those times, although those traveling to and from work, medical workers and first responders and law enforcement would be exempt from the curfew. Vicksburg also directed restaurants to end on-site dining, but take-out and delivery could continue.

Gulfport closed all of its city buildings and facilities, including parks, as of midnight Friday. A statement from the city said many people are adhering to suggestions of social isolation.

“Unfortunately, there are some in our community who have irresponsibly ignored these recommendations,” Gulfport officials said in a statement late Friday. “People continuing to congregate in the public and at places of business have only served to penalize those observing the new protocols — and worse, have created an environment where this invasive contagion can easily spread.”

The vast majority of people infected with the novel coronavirus get only mild or moderate symptoms, such as fever and cough, and recover in about two weeks. But many will need hospitalization. Particularly vulnerable are older adults and those with existing health problems who can develop severe complications, including pneumonia.