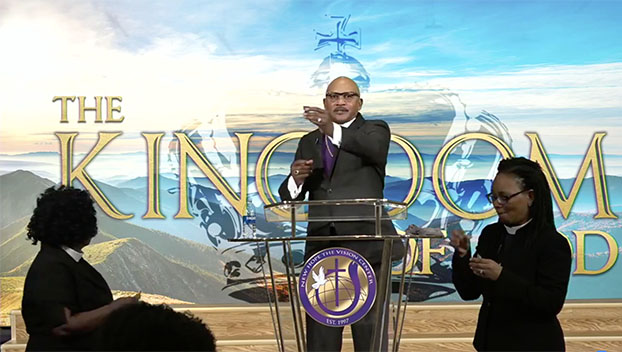 Reeves’ order specifically prohibits gatherings of 10 people or more where people are in close proximity to each other, which includes church services.

The service led by the Rev. Stanley Searcy, pastor of New Hope the Vision Center Missionary Baptist Church in Adams County in Southwest Mississippi was streamed live on Facebook and questioned the government’s authority to limit worship services.

In his sermon, Searcy said he believes prayer will build a hedge around Southwest Mississippi to protect residents from the coronavirus, and he prayed for God to end the virus and to support Reeves and local leaders even as he was defying their orders by holding the service.

Searcy then offered communion to attendees while asking them to keep their 6-feet distance from each other as they went to the front of the sanctuary to get the communion and go back to their seats where they later ate and drank the communion.

Adams County Sheriff Travis Patten, who is a member of New Hope the Vision Center Missionary Baptist Church, and who tested positive for COVID-19 last week, said he has not been to the church since March 17.

Patten said his phone had been ringing all day Sunday with people questioning why New Hope the Vision Center was holding a church service with more than 10 people in attendance despite Reeves’ shelter-in-place order.

Patten said Searcy’s decision to hold the church service put Patten in an awkward position and that he had been on the telephone Sunday morning with Adams County Attorney Scott Slover and the Mississippi Sheriff’s Association attorney.

After Sunday’s service, Searcy said he does not believe his service violated Reeves’ order.

“It is my understanding that he designated churches exempt from that (order),” Searcy said. “(Reeves) also said that he couldn’t regulate churches because we have freedom of religion and churches have to make a conscious decision and he hoped that churches would do the right thing.”

Patten said Searcy’s interpretation of the order is wrong, that the shelter-in-place order does include churches and that Reeves had specifically said churches should not be meeting under the order.

Searcy said members of his congregation had their temperatures taken with a temple thermometer upon entry and were seated staggered in pews more than 6 feet apart.

“We asked all people with any underlying ailments or diseases to stay at home and not come to the service. …,” Searcy said. “We’re staggering every other pew and persons don’t sit directly behind another, they sit opposite of one another. Our church holds over 1,800 people and we might have had 250 here today and we fan out over the church. … We didn’t just have them seated 6 feet apart. We had them seated 12 feet apart.”

“We have a couple of more weeks of this left,” Patten said of Reeves’ order which lasts until April 20. “My hope is we can reach a compromise prior to then, but if other actions have to be taken we are sworn by duty and by the governor’s office to enforce it and that is just what we will have to do. My goal is to talk to people. Not to go around arresting everybody, but to talk to them first and see will they comply so we don’t have to get to the point of an arrest.”

Patten said everybody’s health matters and that is why the order is in place.

“I want to remind any leaders in this community, I love them all, but if somebody were to die from getting some disease because of their assembling of themselves, whose hands will that blood be on?” Patten said. “I don’t want it on mine and I don’t want it on theirs and that’s why we are pleading with the public to just give us some time to get this thing under control and then go back to doing what they are doing.”

Patten said the Mississippi Highway Patrol might be enlisted to start helping enforce the shelter-in-place order since it is a state order.

“After talking to all the sheriffs, because it does put us all in a compromised position, and not just us but the governor, it’s just one of those things they will have to do,” Patten said. “I think what is going to happen is … some type of agreement is probably going to be reached for the highway patrol, since it is a state order, and possibly they may come in and start helping us to enforce this order.”

Patten said he does not know of any other New Hope the Vision Center church members who have tested positive for COVID-19 besides himself.

“Right now, this virus is running around rampant,” Patten said. “At one point they were saying 6 feet was good enough. … I know he (Searcy) has nurses at the doors screening people for fever. I know they are keeping 6 feet apart. I know that they are sanitizing and doing everything that they are supposed to other than making an assembly of 10 or more. I would just tell any pastor or leaders — I’m not just going to point at Bishop Searcy — I’m going to say to any leader to just think about how many lives have been lost in accordance with how many have been healed and I just wouldn’t want something to happen in that sanctuary or any other one because of one person infecting another.”

Searcy said communion cups had been sanitized before they were placed on a table for church members to pick up themselves.

Following communion, the church took an offering collection of tithes and food donations for the church’s food pantry.

“Normally we would have passed the communion plate around, but we didn’t do that for this service,” Searcy said. “Those who took up our offering were wearing gloves and masks and held the plate out.”

Members were told not to congregate and to leave immediately after the worship service concluded, Searcy said, adding that some services such as the 9 a.m. morning worship service had been canceled so that church staff would have time to sanitize the pews between each service.

Searcy said even if law enforcement officers had come and told him to completely shut the church doors to the public, he wouldn’t do so.

“I have a right to my worship,” Searcy said. “No law enforcement has the right to tell me that I can’t congregate. … I know pastors in India that have been threatened before the coronavirus that if they preached in Jesus name they would be killed. Our pastors have told us don’t pray for him because he’s willing to die for Jesus. … If he’s willing to die for his beliefs in a country that had those restrictions before corona, then I’m willing to die and go to jail and be persecuted and be talked about.”

Patten said the Centers for Disease Control and Prevention recently said the 6-feet rule is not enough to protect people from the virus because it is now believed COVID-19 can be spread through airborne transmission at further distances.

“I would just tell you there is man’s law and there is God’s law,” Patten said. “Just be careful about the choices they are making and just try to help us for these couple of weeks not to endanger any more civilians in to getting it. … I’ve been doing what I’m supposed to do, staying at home and trying to be a good leader in that aspect and not lead people down the wrong path.”