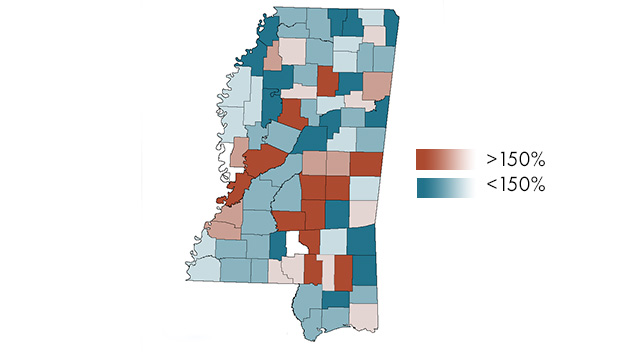 As Mississippi counties continue to fight the spread of the novel coronavirus, some counties have seen dramatic jumps in the number of reported cases.

In the last seven days, one Mississippi county saw its confirmed cases of COVID-10 increase tenfold. One other county, a few miles saw the number of its cases increase by 900%.

The number of confirmed cases of COVID-19 more than doubled in 12 Mississippi county.

On March 31, the Mississippi Department of Health reported one case of the virus in Smith County.

Similarly, Kemper County on the eastern border of the state saw its number of cases multiply from 1 case to 10 cases — a 900% increase — in the same period between March 31 and April 7.

As a whole, the state experienced a 104% increase in cases in the same period. On March 31, MSDH reported 937 confirmed COVID-19 cases in the state. Seven days later that number stands a 1,915 case — an increase of 978 cases.

In addition to Smith and Kemper counties, 10 other counties saw the number of virus cases more than double.

Some counties in the state are just beginning to report cases. On March 31, Green, Jasper, Stone and Wayne counties reported zero cases of the virus. On Tuesday, the counties had reported between 1 and 5 cases since last week.

On Tuesday Jefferson Davis County and Issaquena counties have yet to report any cases.

Here is a county-by-county look at how the number of reported COVID-19 cases has increased in Mississippi since March 31.

“I have a right to my worship” — Mississippi pastor…