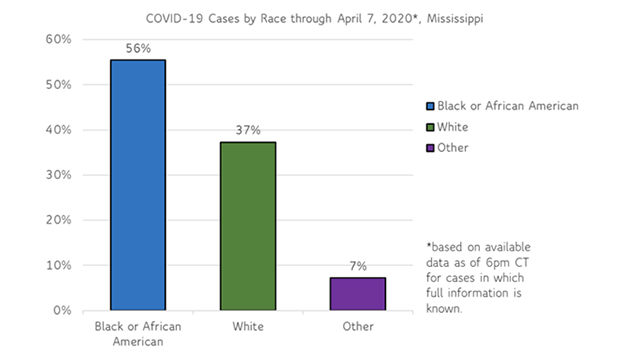 Numbers released Wednesday show the stark disparity in how the new coronavirus is affecting black and white Mississippians, reflecting longstanding health problems in a state where African Americans are more likely to be poor and uninsured.

The state Health Department said 72% of Mississippi residents who have died of COVID-19 were black and 28% were white. The department said that was based on cases for which “full information” was available, as of Tuesday evening.

Derrick Johnson, a Mississippi resident who is national president of the NAACP, told The Associated Press on Wednesday that Mississippi leaders and the White House were slow to respond to the coronavirus pandemic. Republican Gov. Tate Reeves issued a stay-at-home order that took effect Friday after facing widespread criticism that he had waited long after governors in many other states.

“Policy leaders here refused to follow the advice of medical experts as opposed to political prognosticators,” Johnson said. “Tate Reeves, along with many Southern governors, didn’t take it seriously enough.”

Reeves has said he was taking advice from medical experts.

Wednesday was the first time the Mississippi Health Department posted racial demographic information about the virus on its website. It had already been releasing information by age and sex. The posting of detailed information came a day after the state epidemiologist, Dr. Paul Byers, said more than 50% of Mississippians testing positive for the virus or dying from it are black.

Mississippi has a high poverty rate and a large percentage of uninsured residents who might be less likely to seek preventative care for chronic conditions. The state also has high rates of heart disease, diabetes and asthma, which can make people vulnerable to COVID-19.

“We know that there are racial disparities in those diseases already, and we are seeing impacts now,” Byers said Wednesday during a news conference with Reeves.

Byers said the health disparities are “troubling.” Both he and the governor urged people to continue avoiding large groups to slow the spread of the virus.

“We still believe the worst days are just ahead of us,” Reeves said.

The Health Department said Wednesday that Mississippi’s overall coronavirus caseload grew to at least 2,003 infections and 67 deaths as of Tuesday evening. That is an increase of 88 cases and eight deaths from the previous day. The outbreak has spread to at least 41 long-term care facilities.

Mississippi’s stay-at-home order took is set to expire April 20. Reeves said he will decide by Tuesday whether to extend public school closures beyond the current date of April 17.