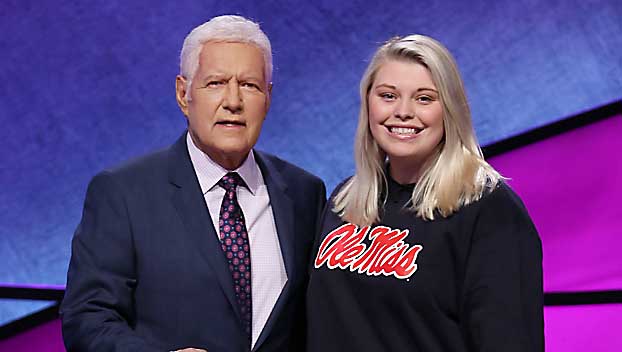 University of Mississippi sophomore Londyn Lorenz skated through the first round of the Jeopardy! College Championship Thursday, securing her spot in the semifinals and $10,000 in prize money.

Though her competitors got off to a fast start, she quickly jumped from third to first place just before the first commercial break and held her lead until the end, beating her closest competitor by more than $18,000. She also was the only player to correctly identify author Harper Lee as the answer of the Final Jeopardy question.

“I was nervous; Kylie (Weaver, from Penn State) and Alistair (Gray, from UC San Diego) were doing good and I never got a Daily Double, so I couldn’t capitalize on that,” Lorenz said. “It was scary because I could feel them getting close but luckily, the categories were Drake and history.”

Lorenz, from Perryville, Missouri, is an Arabic and international studies major, so she said she was sad to see an Arab Spring category on Friday’s episode of the tournament.

Her semifinals episode airs Tuesday (April 14), with her competing for a spot in the final round of the tournament and a shot at the $100,000 prize.

The Jeopardy! College Championship has filled a void for many college sports fans looking for other forms of competition and entertainment. Lorenz said the support and feedback has been exciting.

“It was so hard not to tell anyone how far I got,” she said, because the tournament was filmed in February. “I was able to keep it from my mom and my friends this long. I’m just glad I can talk about it now. But now, everyone assumes I won the whole thing, and I can’t say if I did or not.”

Check local listings for the times and stations airing “Jeopardy!” in your area.