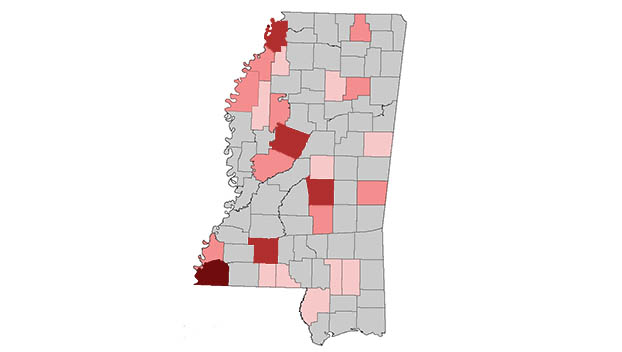 As cases of COVID-19 coronavirus rise across the state, one Mississippi county continues to be a hot spot in the entire country.

Wilkinson County in southwest Mississippi is one of the top 50 counties among 3,007 counties in the nation with the highest number of confirmed COVID-19 cases per capita.

Counties in New York and New Jersey continue to outpace the nation topping 2,000 cases per 100,000 people.

To the north, Adams County cases were rising at a faster rate – doubling every four days.

On Wednesday, the top five counties with the highest infection rates per 100,000 people were:

On Wednesday, several Mississippi counties saw a significant increase in the number of cases.

In Lincoln County, Marion County, Noxubee County and Simpson County, the number of cases increased more than 60% on Wednesday compared to the numbers reported Tuesday.

Below is a list of the infection rates for each Mississippi county and how fast the cases are rising in each county.