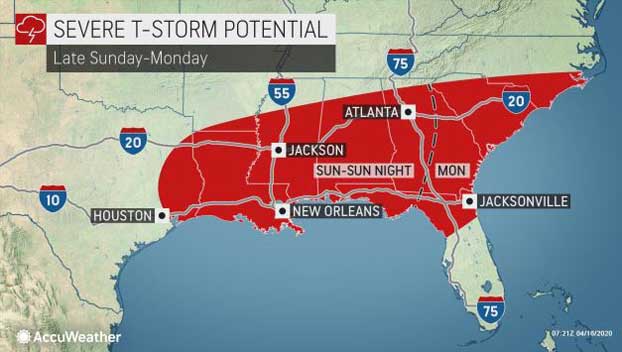 As crews across Mississippi continue to clean up debris and bury the 12 people killed after Easter Sunday’s tornado outbreak, weather forecasters say more potential severe weather may be in the forecast, perhaps as early as this Sunday.

“The main threat will be for damaging winds up to 60-70 mph and large hail up to golf ball size,” forecasters said. “A tornado also cannot be ruled out.”

Severe weather is likely to be in the forecast over the coming weeks, said Paul Pastelok, an Accuweather long-range forecaster.

“The overall weather pattern looks loaded for severe weather with a potential event or outbreak every 2-4 days in the South into early May,” Pastelok said.

The grim outlook is not what the nation needs given the concern for the spread of COVID-19.

“It still looks like a significant number of storm systems will cut across the South from the Pacific over the next couple of weeks, which will keep the pattern very busy and can really have people on edge,” he said.

There also looks to be a migration or expansion of potential severe weather events farther west, toward the Plains and perhaps farther north over the Midwest moving forward into May.

This time in April is no stranger to severe weather. The notorious and deadly 2011 Super Tornado Outbreak occurred from April 25-28 when a multi-day round of dangerous storms claimed 321 lives across several states in the U.S.

Like 2011, 2020 has started off as an active year in terms of severe weather, and the 34 fatalities from last weekend’s violent severe weather pushed 2020 ahead as the deadliest year for tornadoes since 2012, when 68 fatalities were blamed on twisters. As of Wednesday, 67 deaths in 2020 have been attributed to tornadoes. The extreme 2011 season brought a total of 553 deaths due to tornadoes, making it the second-deadliest year on record for the nation.