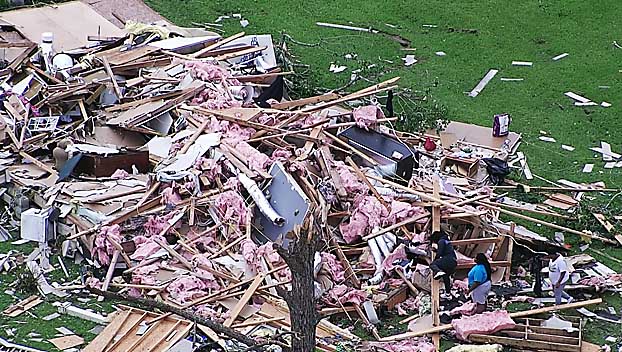 The power of the storm is difficult to imagine. In total, that single tornado, which cut a wide path of destruction for 68 miles across five counties, killed 8 people. It was the widest known tornado to ever strike Mississippi at 2.25 miles in width. It ranks as the third most wide tornado in U.S. history.

Experts storm damage surveyors with the National Weather Service have published their preliminary damage reports for the EF4 storm and the damage is wide-ranging and their descriptions underscore the immense power such monster tornadoes hold.

“The tornado reached its peak intensity as it moved across a field north of Graves Key Road (near Bassfield, Mississippi),” the National Weather Service damage report states. “At this location, the foundation of a wood frame and metal roof cabin was swept clean. A truck parked at this cabin was tossed approximately 300 yards downwind, and trees that remained standing at this site were partially debarked.”

Did you catch that? The tornado picked up a truck and hurled it 300 yards, that’s three football fields. It was one of two pick-up trucks that were taken airborne and thrown several hundred yards away by the powerful tornado.

The monster storm, which forecaster believe may have had more than one vortex or funnel cloud at times, was on the ground for 1 hour and 16 minutes, chewing up everything in its path.

“A large swath of extreme tree damage was noted as the whole forest was leveled. An intense core of the tornado was evident by debarking of trees along a well defined center line or sub-vortex feature,” experts wrote.

Farmers along the path reported the deaths of approximately 60 cattle and approximately two dozen chicken houses as well, the storm damage surveyors wrote.