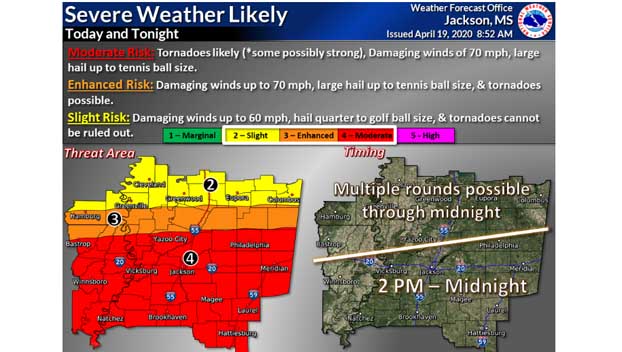 High winds, hail and heavy rain pounded parts of Alabama on Sunday, as forecasters warned residents to brace for possible tornadoes and flooding later in the day.

More than 24,000 customers were without electricity on Sunday, according to www.poweroutage.us.

It was the second Sunday in a row that the South was hit with severe weather.

The National Weather Service on Sunday said four Alabama counties were under a flash flood warning until 11 a.m. local time because of heavy rain: Bibb, Chilton, Coosa and Shelby. Local media reported high winds had uprooted trees and left blankets of hail on the ground in some areas.

“Two to three inches of rain has already fallen and an additional one to two inches is possible,” The agency said on its website.

The agency said strong tornadoes were a possibility for parts of Louisiana, Mississippi and Alabama on Sunday.

A swath of damaging winds and a continued tornado threat will also extend across Georgia and parts of South Carolina through Sunday night.

The storm threat comes a week after Easter storms pounded the Deep South. The National Weather Service said more than 100 tornadoes struck the South that Sunday and Monday.

Officials said at least 36 people were killed in the two-day outbreak of storms.

One of last Sunday’s tornadoes was so powerful it…