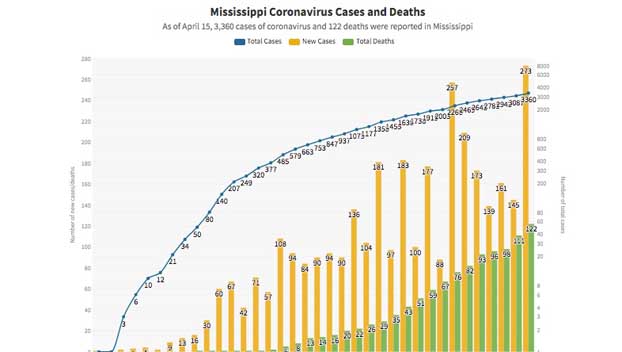 Mississippi Gov. Tate Reeves said Monday that he believes the state is reaching a “plateau” in the increase of new coronavirus cases, and he will consider in coming days how the state should ease into reopening parts of its economy.

“We are confident … that our health care system is not going to be overwhelmed,” Reeves said during a news conference, joined by the state health officer.

Reeves’s statewide stay-at-home order began the evening of April 3 and remains in place until April 27. Many businesses deemed “nonessential” have been closed, and claims for unemployment benefits have skyrocketed in Mississippi, as in other states.

Republican Reeves announced late last week that starting Monday, some of those closed businesses, including clothing stores and florists, could sell items for delivery or curbside pickup. Some smaller businesses had said they were losing money to big chain stores that have remained open. The chain stores are selling groceries and other items, including clothes.

Mississippi lakes and beaches have the governor’s permission to reopen, with decisions made by local authorities.

Reeves has said people should not gather in large groups, and they should maintain distance from each other. One of the coastal counties has reopened beaches. Dozens of people were fishing Monday at the Ross Barnett Reservoir near Jackson.

Reeves on Monday cautioned that health officials must remain vigilant about the potential for virus outbreaks among vulnerable people, particularly in long-term care facilities.

And, he said social-distancing measures will remain in place even after more businesses start reopening.

The state Health Department said Monday that Mississippi had at least 4,512 confirmed cases and 169 deaths from the coronavirus as of Sunday evening. That was an increase of 238 cases and 10 deaths from the previous day. The state’s population is about 3 million.

The department said Monday that coronavirus cases had been confirmed in at least 77 long-term care facilities such as nursing homes.

The Health Department said 51,434 coronavirus tests had been done in the state as of Sunday.

Dobbs said Monday that he thinks public and private labs have done a “Herculean task” for testing. In response to questions, Dobbs said he wants the state to double its testing capacity. He also said he wants same-day test results. Some results are now taking days.

The chief of the Mississippi Band of Choctaw Indians, Cyrus Ben, said Saturday that he has tested positive for COVID-19, and he is urging people to follow advice of health professionals to try to slow the spread of the highly contagious virus.

Ben said in a video posted to the tribe’s Facebook page that he had not experienced any symptoms. He said he is quarantined with his family and is continuing to work remotely.

“It only takes one person who has been exposed to the virus to go out in public and expose everyone that they could come in contact with,” Ben said. “That includes their families, their friends. And that is why we say take precaution, be vigilant.”

The Choctaws have 11,000 members in 10 of Mississippi’s 82 counties. The tribe’s Pearl River Resort in central Mississippi’s Neshoba County has two casinos and hotels. The resort is closed indefinitely because of the coronavirus pandemic, and the tribe announced Friday that it was putting most of the resort employees on unpaid furlough.

Mississippi’s state-regulated casinos, run by private businesses and not by the tribe, have also been closed for weeks because of the pandemic.