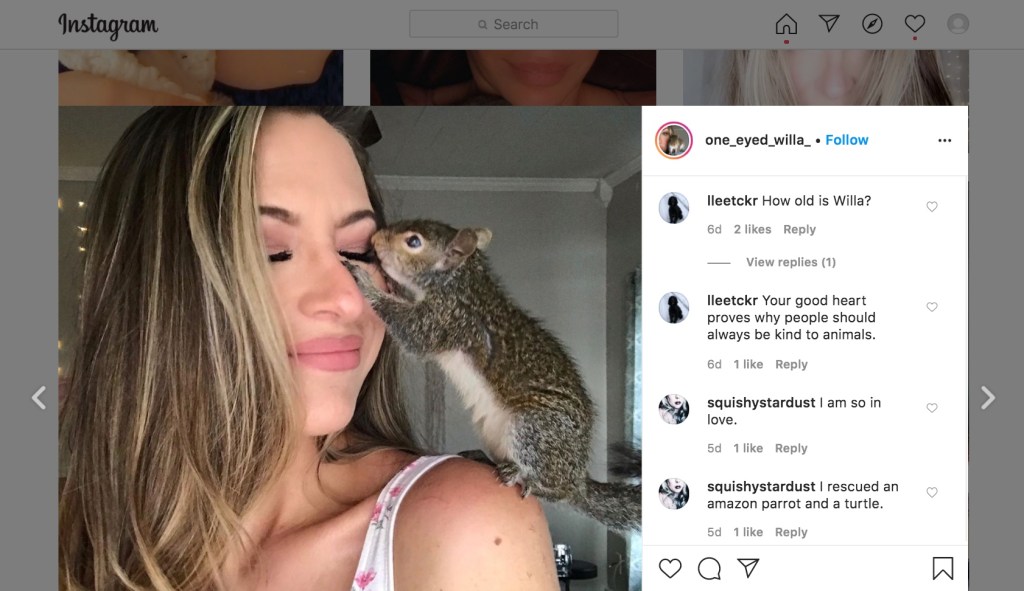 A one-eyed squirrel that gained a social media following is being returned to nature.

The Louisiana Department of Wildlife & Fisheries took Willamina the squirrel from Emily Istre of Lafayette on Thursday, the Acadiana Advocate reported.

Istre created an Instagram account for the squirrel, @one_eyed_willa, and posted images of it eating off a plate, snuggling with her or hanging out in an elaborate indoor treehouse. In videos, she sings a lullaby to it and does yoga while the squirrel scampers underneath.

The account gained more than 1,600 followers, but she found that caring for a baby squirrel is exhausting: “It’s like having a toddler on meth,” Istre told the newspaper.

Istre said she started caring for the baby squirrel in mid-March, after her mother found it alone in her backyard, dehydrated and with an infected eye. She tried to contact the state wildlife agency and people who rehabilitate squirrels through a list on the Department of Wildlife & Fisheries website, but with coronavirus restrictions shutting things down, she said got no response.

So she did online research about how to care for the animal, and things took off from there.

Melissa Collins, a wildlife biologist and permits coordinator for Louisiana Department of Wildlife & Fisheries, said it is illegal for anybody to rehabilitate wildlife without getting a permit through the agency. Collins said the agency remains in operation during COVID-19 restrictions.

Collins did not comment specifically on Istre’s situation but told the newspaper that people with good intentions often “intervene unnecessarily, removing what appears to be injured/orphaned wildlife” from nature.

In comments on her Instagram account, Istra said Willamina has been placed with a wildlife rehab specialist she described as “a WONDERFUL WOMAN who truly adores animals.” She said the squirrel will be released on a private property with nesting boxes and trail cameras.

Istre said she does not believe in trying to domesticate wild animals, but she believes this situation was unique. She also said caring for a squirrel is nonstop work.

“It takes a lot of patience. She makes a big mess. I’m constantly cleaning. Constantly. I don’t want people to think this is a normal thing or something to aspire to.”