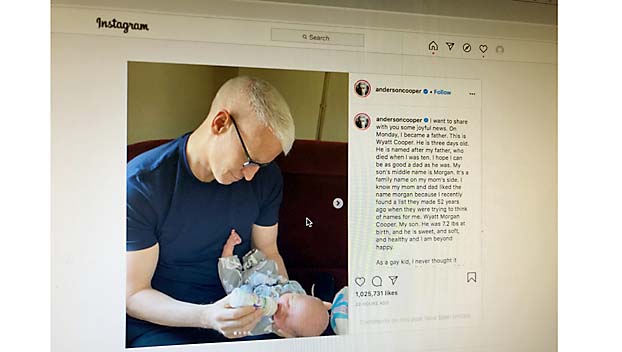 Anderson Cooper is a father, a milestone the CNN anchor says for a while he didn’t believe would ever happen, and he’s named the infant for his Mississippi-born father.

Cooper announced the birth of his son, Wyatt, Thursday evening on his show and in a lengthy Instagram post. His son was born on Monday via a surrogate, the newsman said, and is named after his father who died when Cooper was 10.

Cooper father was Wyatt Emory Cooper.  The late Wyatt Cooper was born in Quitman, Mississippi, near Meridian September 1, 1927. He moved with his family as a child to New Orleans before attending college in Los Angeles. He became an author, actor and screenwriter.

Wyatt Cooper married Gloria Vanderbilt on Christmas Eve in 1963. She reportedly said Wyatt Cooper was the only true love she ever knew.

The couple had two children together, Carter Vanderbilt Cooper in 1965 and Anderson Cooper in 1967. Carter committed suicide in 1988, leaping to his death from the balcony of his mother’s 14th story New York apartment while she watched. Anderson later become a prominent TV news anchor, still working on CNN.

Family meant a great deal to Anderson Cooper and influenced his decision to become a father and in naming his newborn son.

“On Monday, I became a father. I’ve never actually said that before out loud, and it still kind of astonishes me,” Cooper said on his show, “AC360.”

The anchor said he felt it was important, amid stories about those who are suffering and dying during the coronavirus pandemic, to “hold on to moments of joy.”

The segment included several photos of the newborn.

“As a gay kid, I never thought it would be possible to have a child, and I’m grateful for all those who have paved the way, and for the doctors and nurses and everyone involved in my son’s birth,” Cooper wrote on Instagram. “Most of all, I am grateful to a remarkable surrogate who carried Wyatt, and watched over him lovingly, and tenderly, and gave birth to him.”

Cooper, 52, said he regretted that his parents and brother were not alive to meet his son. Cooper’s mother, Gloria Vanderbilt died in July at 95.

The Instagram post included a photo of Cooper feeding his son a bottle. The baby’s middle name, Morgan, is also a family name. It was a name his parents considered for Cooper, according to a list he recently found.

I want to share with you some joyful news. On Monday, I became a father. This is Wyatt Cooper. He is three days old. He is named after my father, who died when I was ten. I hope I can be as good a dad as he was. My son’s middle name is Morgan. It’s a family name on my mom’s side. I know my mom and dad liked the name morgan because I recently found a list they made 52 years ago when they were trying to think of names for me. Wyatt Morgan Cooper. My son. He was 7.2 lbs at birth, and he is sweet, and soft, and healthy and I am beyond happy. As a gay kid, I never thought it would be possible to have a child, and I’m grateful for all those who have paved the way, and for the doctors and nurses and everyone involved in my son’s birth. Most of all, I am grateful to a remarkable surrogate who carried Wyatt, and watched over him lovingly, and tenderly, and gave birth to him. It is an extraordinary blessing – what she, and all surrogates give to families who cant have children. My surrogate has a beautiful family of her own, a wonderfully supportive husband, and kids, and I am incredibly thankful for all the support they have given Wyatt and me. My family is blessed to have this family in our lives I do wish my mom and dad and my brother, Carter, were alive to meet Wyatt, but I like to believe they can see him. I imagine them all together, arms around each other, smiling and laughing, happy to know that their love is alive in me and in Wyatt, and that our family continues.