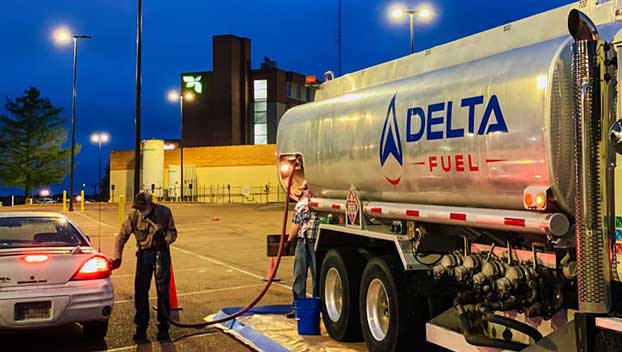 Even with gas prices at their lowest point in nearly three decades, Delta Fuel Company president Adam Vegas wanted to do something to help people working at two local hospitals during the COVID-19 pandemic.

Vegas recently orchestrated having gas tanks — or what he called a mobile fueling site — set up at the parking lot at both Merit Health Natchez and Riverland Medical Center. Adam’s father Clint Vegas, who is owner of Delta Fuel, said Adam was at each location when this was taking place.

Adam said they helped fill the gas tanks of the cars that were in the parking lots of the healthcare workers. It was his, and Delta Fuel’s in general, way of helping those in the front line of the coronavirus outbreak.

“We reached out to the hospitals and told them what we were going to do,” Adam said. “We were going to help anyone we could — nurses, doctors, cleaning staff. We set up a mobile fueling site outside the hospital and we went out there on their shift change and we filled up their cars with free gas.”

Jessica Cauthen, who is the marketing and recruitment director for Delta Fuel, said this event took place on Friday, April 24 at Riverland Medical in Ferriday, Louisiana, and on Saturday, April 18 at Merit Health Natchez, Mississippi.

Adam said that the healthcare workers at both Merit Health Natchez and Riverland Medical Center were very welcoming.

“We wanted to something different from everybody else … something besides serving food,” Adam said. “We felt like this was a bigger impact so they wouldn’t have to go to the station and fill up.”

Stuck Mississippi horse gets a little lift from his…